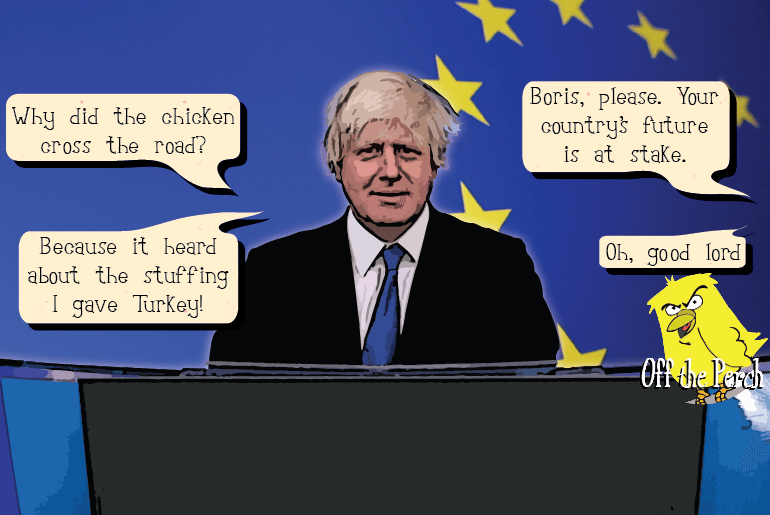 When Boris Johnson was appointed Foreign Secretary, the people of Britain were prepared for it. For a start, we had our famous sense of humour. A sense of humour which we developed as a defence mechanism against the conveyor-belt of bastards who’ve ruled over us.

We’ve also had several years of ministers being chosen for their ironic value. Ministers which have included:

The EU, however, has been woefully unprepared for such high-level bants. As such, they’ve failed to see the humour of BoJo turning up and performing recycled comedy routines from the 1970s. This buffoonery reached a peak during an exchange with Italy’s Economic Development Minister, Carlo Calenda. An exchange which Calenda related to Bloomberg:

Boris Johnson as Foreign Secretary is great – no one shrugs him off as bumbling Boris abroad – they just tell him he's a fucking idiot.

Since Calenda came forward, several other economic ministers have related tales of Johnson’s arse-headed tomfoolery. The Belgian Vice Chancellor was the first to speak out, telling Off The Perch that:

Boris drove into the meeting in a small electric car. The kind of vehicle which you might give to your grandchild as a play-trinket. He was wearing a fez and pomping his little horn as he drove around the room. ‘What are you about, Mr Secretary?’ I asked him. ‘I’m having my cake and eating it!’ he shouted in return. Then he hit himself in the face with a custard pie and drove out of our office. He didn’t even take the mineral water we had provided. He didn’t even take the moules-frites.

I begged with him to engage. Pleaded with him. I said that although I fully intended to get the best deal for my people, I still could not ignore the plight of his. That I could not stand by while he larked away their future for the giggles.

So I grabbed him by the lapels. I screamed at him. Mr Johnson! You are throwing away centuries of British progress for the sake of a frivolous whimsy! Please take a hold of yourself! And sit down and negotiate before it is too late!
And how did he respond? He squirted me in the face with his novelty pocket flower, and then he roly-polied out of The Bundestag.

…that isn’t funny is it?