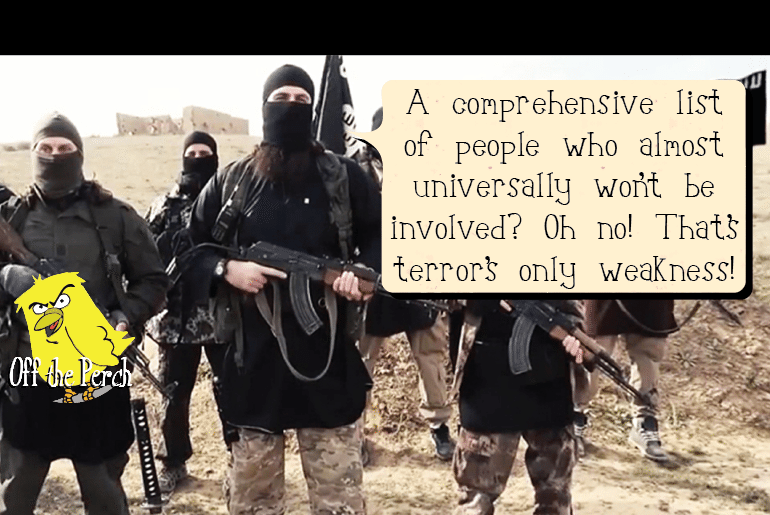 As a result of President Obama’s cowardly refusal to go full-on Nazi, the Trumpenführer has stepped in to do what it takes. Namely to produce an alphabetical register of Muslims, which will prevent terror…

And when asked if his register would be any different to Hitler’s register of Jews, Trump bravely shrugged:

Yet it’s obvious that a comprehensive list of American Muslims is the only way to defeat Daesh (Isis/Isil). Despite the group not living in America. Or that Americans who want to perpetrate terror may be smart enough to:

Off The Perch spoke to one of the geniuses behind this proposal:

I’ll tell you where I got the idea from. I was looking at a phone book, and I thought ‘jeez, these things are really thin now’. And then I remembered that there wasn’t all this terror back when phone books were a lot fatter. Or at least not at home, anyway. And I thought that maybe if we produced a big ol’ phone book of Muslims, maybe that would put an end to all the terrorist attacks? That seems like a logical connection, right?

Some critics have pointed out that terrorist suspects are already monitored. And as such, making it necessary to monitor every single Muslim will only serve as an unnecessary distraction. Kind of like if you’re trying to catch a fish, and you make your job ‘easier’ by filling the pond with a few million fish that you don’t want to catch.

There’s also a question of how people will be deemed acceptable for inclusion on this registry. Will it be people who identify as Muslims? Or will it be anyone who looks – oh, I don’t know – not so white, maybe?

Because if it’s the latter, people really need to stop pretending this isn’t an ethnic thing.