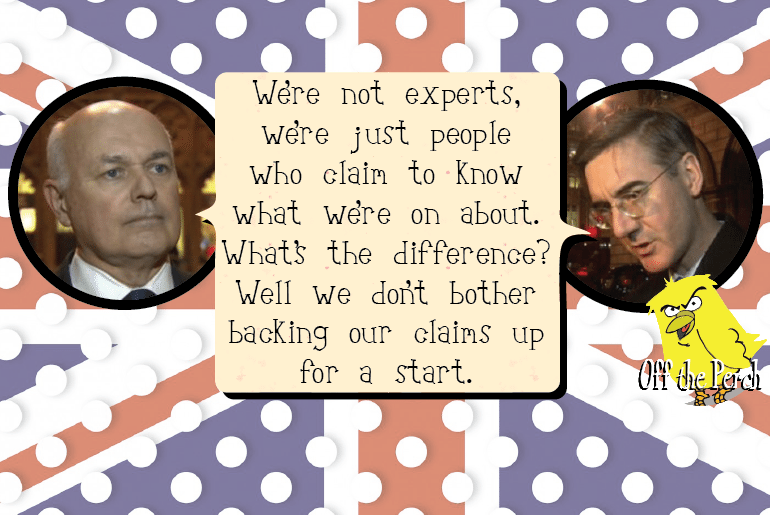 How dare he suggest that the thing I wanted will have consequences?

Which seems odd, as IDS has previously been a big believer in consequences. Being, as he is, the man who believed that people should be punished for choosing to have things like poverty, a disability, or any sort of unforeseen and unavoidable circumstance.

Which was when they realised.

That all of their research into Brexit had turned them into the thing that they despise the most:

n. A person who claims that experts have no actual expertise while simultaneously claiming that they themselves are full of it

The first realisation came when Jacob Rees-Mogg was being interviewed by June Sarpong. Sarpong asked him why people should believe him over the experts. Rees-Mogg said:

Because I actually know quite a lot about this sort of thing, actually.

Unfortunately for Rees-Mogg, The Conservative Brexit Club was walking past as he made this assertion. And although the club is made up of well-to-do chaps and chapettes, they’ve really taken Michael Gove’s anti-expert message to heart.

One of them shouted at Rees-Mogg.

And so they gave chase, and Rees-Mogg ran off as fast as he could. He was of course able to escape though, as he was formerly ‘Wally’ of ‘Where’s Wally?’ fame. And as such, his ability to blend into a panoramic street scene is second to none.

After failing to track down Rees-Mogg, The Brexit Club contacted all of their chums to let them know that a good ol’ fashioned expert-hunt was afoot. Gove was delighted when he heard about it. But then his acolytes realised that Gove is a regular columnist in The Times, which must mean he’s an expert in something? Either that or he’s just another finger-puppet of the publication’s owner – Rupert Murdoch.

Gove didn’t mind being cannibalised by his cult of ignorance though. In fact he relished it. And as they tucked in to his flesh, he shouted at them:

Make sure to eat my brains, children! That way you’ll absorb all of the knowledge and expertise that I very pointedly don’t have!

Forked in the head

Fortunately for the fleeing Brexperts, their followers in The Brexit Club ended up doing themselves a mischief. A terminal mischief. Because they decided that if they wanted to be a proper angry mob, they needed to get themselves some pitchforks. They refused to listen to the expert advice on how to handle these pitchforks, however, and accidentally ended up pitchforking themselves to death.

And all because these well-to-do types don’t believe the experts.

Or maybe – actually – they do.

And they just know that all of the predicted hardships simply aren’t going to affect them.

That would be way too far-fetched, right?