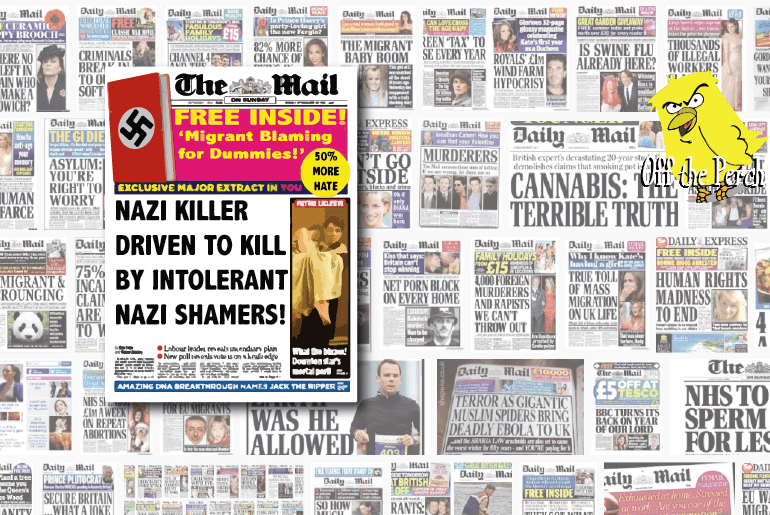 Thomas Mair – the killer of Jo Cox – is a far-right Nazi terrorist who butchered an MP in broad daylight and cold blood. 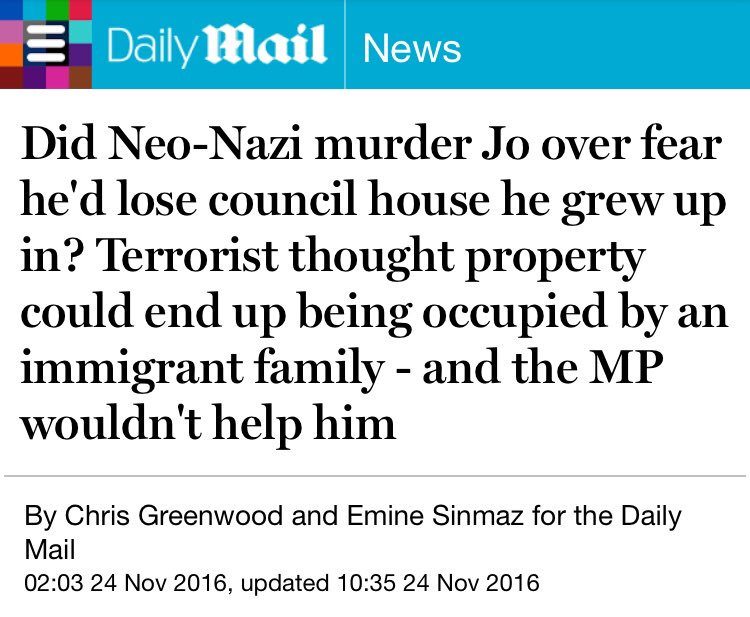 And the fascists went wild! And the racists were cheering!

Because if they can get away with blaming a Nazi hate crime on the people Nazis have historically terrorised, what can’t they blame on immigrants?

And to prove this, The Mail on Sunday is giving away its Blaming Migrants for Dummies book this weekend. A book which Mail hacks had specially commissioned for their own personal use. Although by ‘dummies’, they do of course mean ‘scumbags’.

We can’t publish the entire book here, because even the internet can’t hold that much hatred. But we can provide some of the notes from the introduction. As written by The Mail’s arsehole-in-chief, Hattie Full-Barstward.

And no matter how tenuous the connection ultimately is, people will believe it anyway. Because migrants = bad.

People’s prejudice will fill in the blanks. Primarily because that’s what we’ve conditioned them to do.

If you really want paranoia to take off, you need to be shoving it down people’s throats at every possible opportunity. A problem presents itself, though. Namely that people will notice that they’re never actually coming into contact with this omnipresent danger you’re telling them is everywhere.

Firstly, many people just won’t. And secondly, you can increase the effectiveness of your propaganda by constantly making out how crafty these people are. How cunning and opportunistic. That way, when people don’t see any evidence, it only proves your point. Because they tell themselves they’re not seeing it because of how good these shifty-types are at covering their tracks.

In other words, you make out that immigrants are as detestably conniving as the editorial team at The Daily Mail.

This is what we used to justify the Thomas Mair killing. The fear of migrants. Because fear is a powerful thing. And fear can make people do cruel and unusual things.

And we should know, because we are the ones who spread the fear.

Do you think we don’t get the irony? That we’re blaming the slaying of Jo Cox on the fear of migrants when we’re the ones telling people to be afraid of them!?

Do you think that we don’t relish it?

Because we do. And the fact that it works makes the people who see what we’re doing hate us. And when these people attack us, it only makes our readers trust us more. Because we paint anyone who speaks out against us as the enemy. We paint them as decadent, left-wing traitors. And their criticism of us only serves to prove that these base, liberal turncoats exist.

It’s a perfect circle. And the harder the hate, the more impossible it is to break.

The Mail on Sunday is having to produce a lot more of its own giveaways since Lego dropped them like a hot turnip. As such, the image-obsessed Mail will next week be releasing The Hitler Diet. A diet which involves amphetamines, stress-hatred, and coughing up bile as a result of reading The Daily Mail.

– Support grassroots action against the rise in fascism.

Featured image via John Shafthauer for Off The Perch