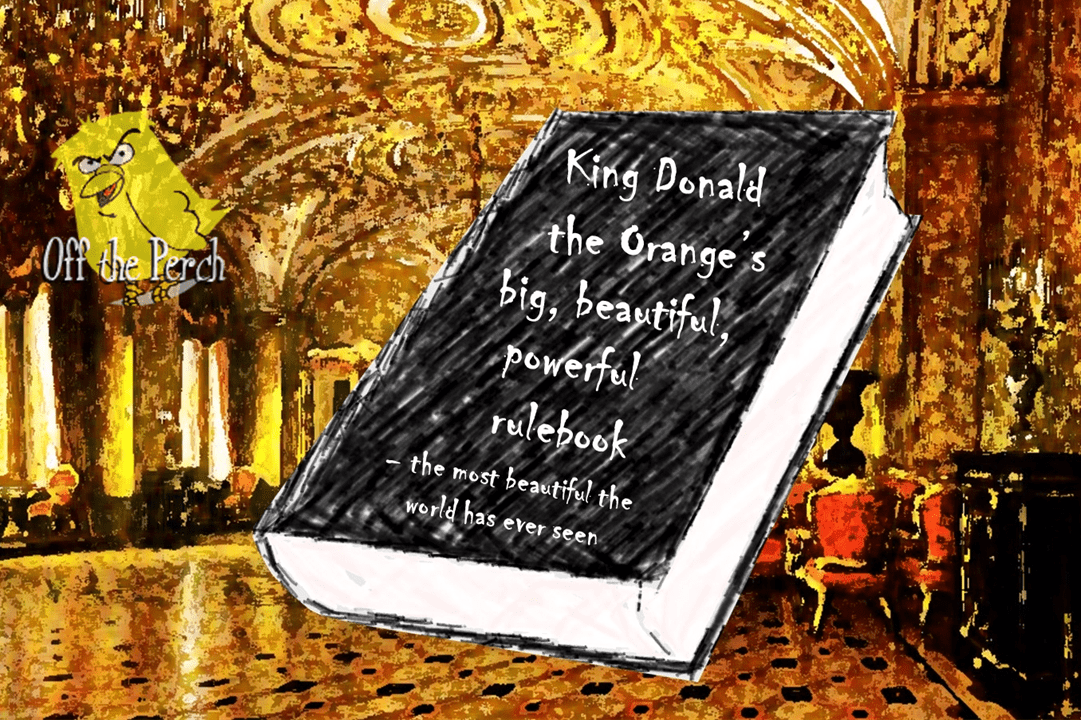 Trumptopia is now on the horizon. And it’s an ugly world, whose most despicable advocates have only received a quiet mitten-slap on the wrist from King Donald the Orange. Which is weird, because he’s got less self-control than a sickly cat vomiting repeatedly on your best carpet. In fact, he’s now decided to soften the impact of his unpredictability by providing US citizens with a “big, beautiful, powerful rulebook – the most beautiful the world has ever seen”. His words, not ours.

Off The Perch‘s exclusive sneaky peak

Trump has already threatened flag-burners with jail time or loss of citizenship. And people who refuse to stand for the national anthem seem to disgust him more than neo-Nazis saying “Hail Trump”. So we know where his priorities lie.

But now, just to make it all crystal clear, he’s actually set these priorities out in a rulebook (to be published at his coronation in January 2017). Again, these are his words, not ours:

And the list goes on. Trump also named gold as the new national colour – decreeing that all citizens must kneel before all that is gold. If not, authorities will cover them in gold paint like in Goldfinger. The national bird, meanwhile, will be the golden eagle rather than the bald eagle. Because it would just be too expensive to put a Trump-style wig on all of North America’s bald eagles. Obviously.

But Trump’s rulebook may have also sown the seeds of his own demise. One of his rules is that US citizens must call him “His Royal Highness King Donald the Orange” when he takes power in January. And this decree has already sent shockwaves throughout America.

Even among many people who thought Trump’s casual misogyny and racism were acceptable in this year’s election campaign, talk of a monarchy in the US is apparently a step too far. One Trump fan who Off The Perch interviewed said: “Calling whole groups of people criminals and terrorists? Well that’s just freedom of expression. But ‘His Royal Highness’? Not in my America. We fought for centuries against Aliens and Antarctic oppressors to get rid of those monarch-monkeys. They’re not coming back on my watch.”

In short, while going after his opponents may not have been enough to get him out of power, his dreams of a golden palace (full of misogynistic jesters from the 60s and bowing, compliant servants) may have been just one step too far for some Trump supporters.

– See real news about Trump’s America at The Canary Global.