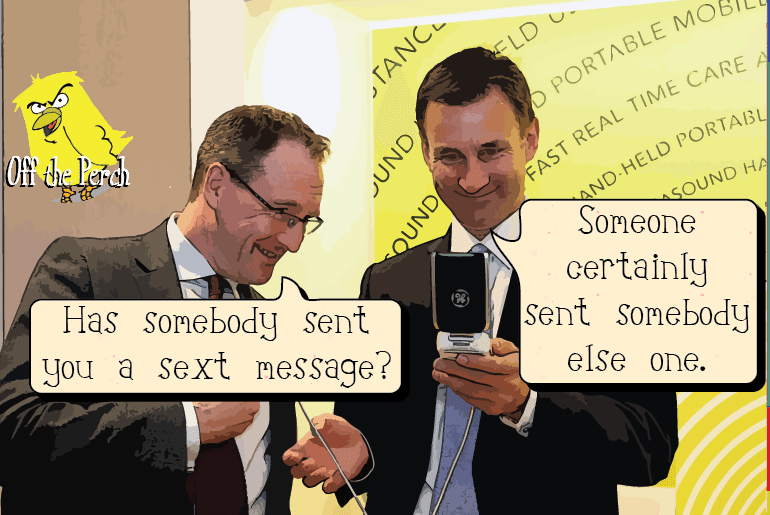 Some eagle-eyed observers on Twitter wondered if it had anything to do with the recent legalising of the ‘Snoopers Charter’.

So they legalise mass surveillance, and two days later Jeremy Hunt is suddenly an expert on under-18's sexting?

That's not creepy at all…

The ‘Snoopers Charter’ is the legalisation of that mass surveillance George Orwell warned us about. Although it has at least been legalised by the Tory Party – a group of ‘people’ who are well known for their… belief in… the sanctity of… human rights…

So yes – any concern that Hunt would be using these extraordinary powers to slime through people’s personal data like a digital slug is of course bananas.

Hunt himself has spoken with Off The Perch to waylay any unfounded fears:

OTP: So, Jeremy. When people want answers on the NHS, you seem to be harder to find than post-Brexit Marmite. And yet, for some mysterious reason, you’re all over this like a rat on a discarded kebab.

JH: Well, the NHS pretty much runs itself. But the issue of ‘sexting’ requires a certain level of… attention.

OTP: Running itself? Running itself into the ground maybe. And in terms of attention, maybe you should have given some of that to the experts? The experts who are saying that education is key – not some unworkable ban on sexting that will only serve to confuse and shame the people you’re supposed to be helping.

JH: But the shame will make it… better.

OTP: Okay, I’m going to assume that by ‘better’, you mean the situation will be resolved. Rather than that it’s going to improve whatever weird, special-interest you have in this.

OTP: Ick. And what about the phone companies’ claim that this ‘sext’-detecting tech you mentioned doesn’t even exist?

JH: Well, if that is the case, I know someone who can… look into it. Someone who can maybe… lend a hand. A certain politician who can possibly…

Of course, there is another explanation for all this. Namely that Jeremy Hunt is attempting to stop people ‘sexting’ by attaching himself to the issue. And in the process, making everyone so creeped out that they’ll never want to procreate again.

And, to be fair, it’s a plan that will probably work.