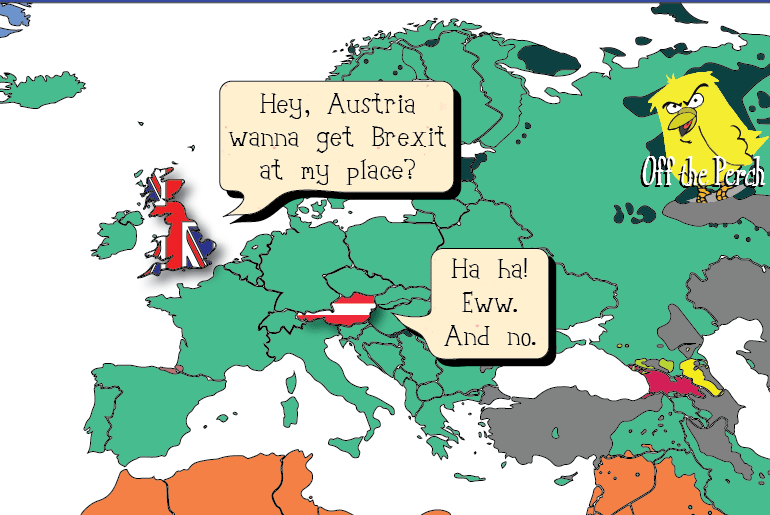 2016 has so far panned out as a rip-roaring success for the forces of fascism/evil/people who hate iconic musicians. As such, everyone was fully expecting Austria to elect gun-toting xenophobe Norbert Hofer to be its next President. A vote which many would have said was a ‘protest’ against the ‘elites’. ‘Elites’ who basically wouldn’t have been too badly affected either way.

We spoke to an average Austrian citizen named Bertolt Frauer about Hofer’s defeat. We’re not sure what qualified him as an ‘average citizen’, although he was wearing a really plain looking jumper. And that does seem to be the main criterion.

OTP: So what made a majority think that repeating the most awful period in history probably wasn’t the best idea?

BF: At the beginning of 2016, there was this idea that voting for far-right despots represented a blow to the establishment. And then that photo of Farage and Trump in a golden elevator came out, and everyone realised what a massive con it all was.

BF: We need to be careful about our image abroad, too. Because right now, Austria is famous for Hitler, the guy who kept a secret family in his basement, and Toblerone. And two of those things are terrible.

OTP: Toblerone’s Swiss though, isn’t it?

OTP: Well, yes, but the Swiss Alps. It seems like an average Austrian would know that, too.

BF: If I’m not average, how do you explain this incredibly beige sweater I’m wearing?

OTP: Good point. And if you need a Toblerone stand-in, Sigmund Freud was an Austrian.

BF: Oh yes, so he was. And he’d probably have a lot to say about America electing a massive penis as President. Over compensating much, guys?

News of the far-right’s defeat has of course dealt a blow to the anti-globalists who supported Hofer. Primarily as they were looking forward to another anti-globalist taking power.

These bozos literally don’t mean a word that they say! They’re just using legitimate anti-establishment feelings to elevate themselves into the establishment.

And up until yesterday, it was full steam ahead.