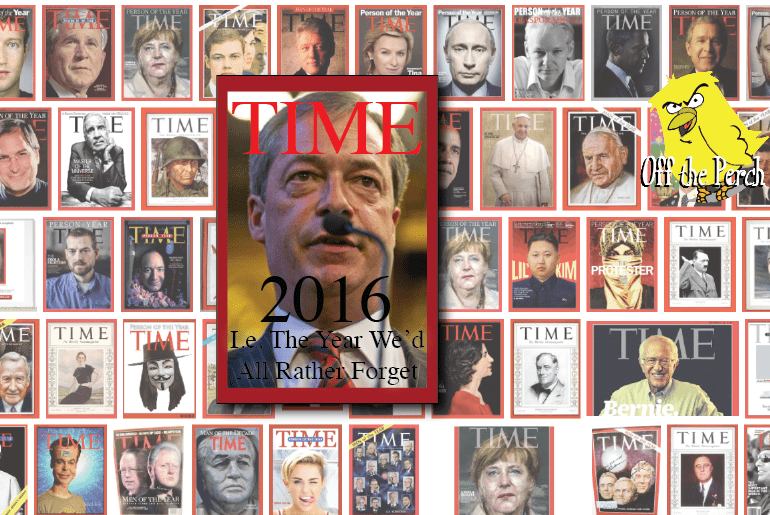 When people heard that Nigel Farage could be Time Magazine’s ‘Person of the Year’, most reacted by vomiting. And then vomiting some more. And then waiting for several hours to see if they could hold down some food. Gingerly eating some digestives and dry toast. And then vomiting until there was nothing left.

But what if Farage is the person who best embodies the spirit of this year? What if he’s the person who most perfectly encapsulates the dismal bilge that the last 12 months have presented? What if Farage is the living embodiment of everything that’s gone wrong? From the rise of global fascism to the admittedly understandable execution of that gorilla?

2016 has been so uniformly terrible that people talk about it as if it’s cursed. We’ve seen the deaths of much-beloved celebrities. We’ve also seen the death of Paul Daniels. On top of that, we’ve seen the world aggressively embracing ‘post-truth’ ideology. And although most of us knew that politics was a foot-long sandwich of horsesh*t before, the sight of people wolfing this unpalatable mess down as if it’s a wedding buffet is indeed something new. Because even though people forced the sandwich down in the past, no one was kidding themselves that it was edible.

And what is Nigel Farage, if not the very embodiment of all this? He’s got the dead celebrity angle going, as he’s basically a zombie Enoch Powell. He’s also got the rancid hot-air side down pat, as he’s made a career from blowing promises out of his arse. So why not make him the grubby fairy that rests atop the half-burnt-out Christmas tree that is 2016?

An important thing to remember about the ‘Person of the Year’ is that ‘people’ are quite often terrible. Especially the ones who have made an impact on history. Just look at some of the other winners of Time Magazine’s ‘Person of the year’:

So as you can see, being ‘Person of the Year’ isn’t necessarily something to be proud of. It’s basically similar to being ‘Bacteria of the Year’. Some years it will be the gut-bacteria which helps you digest complicated carbohydrates. Other years, it will be Treponema pallidum, i.e. syphilis.