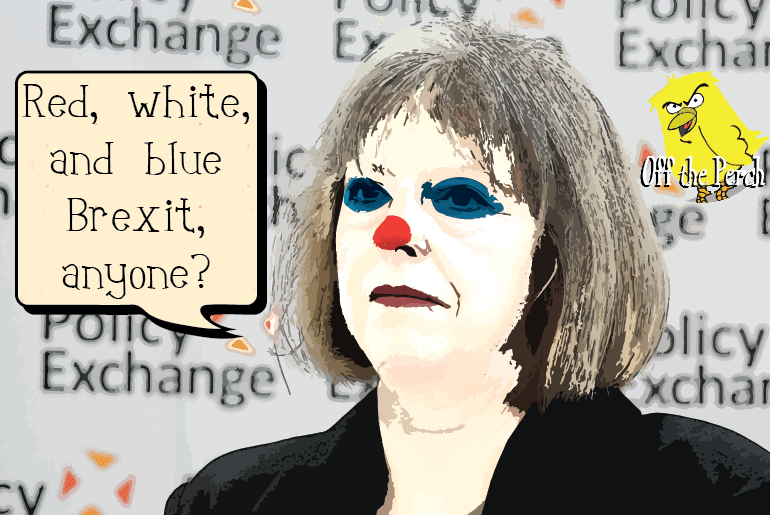 When Theresa May first promised us that “Brexit means Brexit”, people responded to the slogan in three main ways:

You’re kidding me? This? This is the best they could come up with?

THE STUPID! IT BURNS!

“But at least this must be the low point of Brexit rhetoric?” we assured ourselves. “It can’t get any worse than this, right?”

And then came the “red, white, and blue Brexit”. Which means what, exactly? WHICH MEANS WHAT?

Are you talking about the Union Jack? Or are you confirming our commitment to being the good little lapdog that curls up at the bottom of President Trump’s stars-and-stripes bedspread?

Maybe it’s a reference to the fact that you’re making us all look like clowns?

Whatever it is, people once more reassured themselves that this was it. This was the scraping sound at the bottom of the Tories’ bargain-banter barrel.

And yet we were wrong.

Unexpectedly, the government has once more had an internal memo leak. By which we of course mean expectedly.

The contents of this memo were the quasi-patriotic gibberish that they considered before “red, white, and blue”.

And the following is the contents of said memo:

If there’s one thing that this year has taught us, it’s this:

Never stop believing that the government can carry on getting worse and worse. That a more stupid buzzword will be found. And especially that a more absurd politician will just crawl out of the woodwork as soon as the last one’s scurried away.