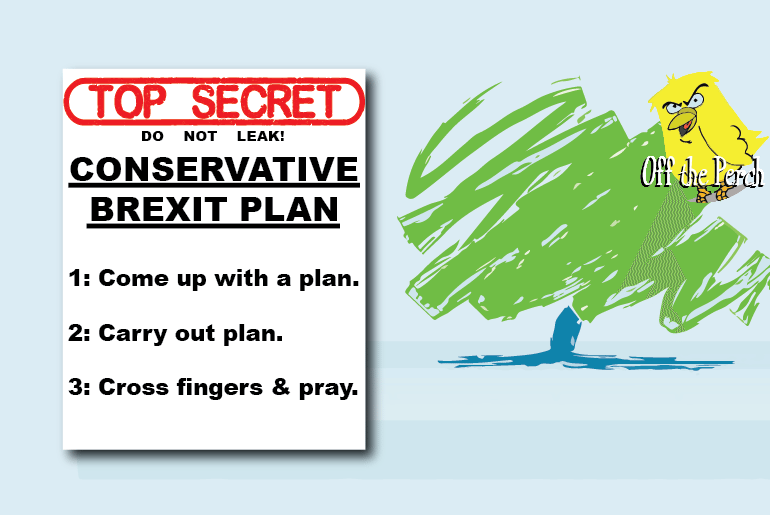 The Labour Party called for the government to explain its Brexit plans, and then set about producing a motion to force it into this. Most political parties supported this, because it would let the public know what to expect from Brexit. And knowing what to expect would obviously enable businesses and workers to prepare themselves better.

The Tories were against it, however. Primarily as they didn’t actually have a plan. And they knew that, if we found out, we’d be madder than a Hacienda rave full of wasps.

The government confused things, though, by adding an amendment to the motion. Said amendment being that if MPs wanted to know their plan, they’d have to agree to enact Article 50 first. Which is… ugh. A pretty terrible deal. Like agreeing to buy a twenty-second-hand Robin Reliant on the condition that you’ll be able to see it after you’ve paid for it.

True to its word, the government has now released its 3-point Brexit plan. And it is:

The first thing to note is that it’s a far more comprehensive and complicated plan than we were expecting. The second is that it’s still not really a plan. And the third is that we’re all almost certainly doomed.

Of course, its doubtful that the Tories could have come up with a plan which would have pleased everyone. Which is probably why they’re not bothering to come up with one in the first place. It’s also potentially why they’re waiting for the EU to force us into a position from its overwhelmingly better bargaining standpoint.

The problem is that the UK has four main schools of thought when it comes to Brexit:

The government knows that it can’t please all of us all of the time. But it can leave us befuddled and disappointed most of the time. And it’s going to carry on leaving us like that until circumstances force it into something different.

Or possibly just increase fossil-fuel use and pray for an early apocalypse.

Featured image via John Shafthauer for Off The Perch