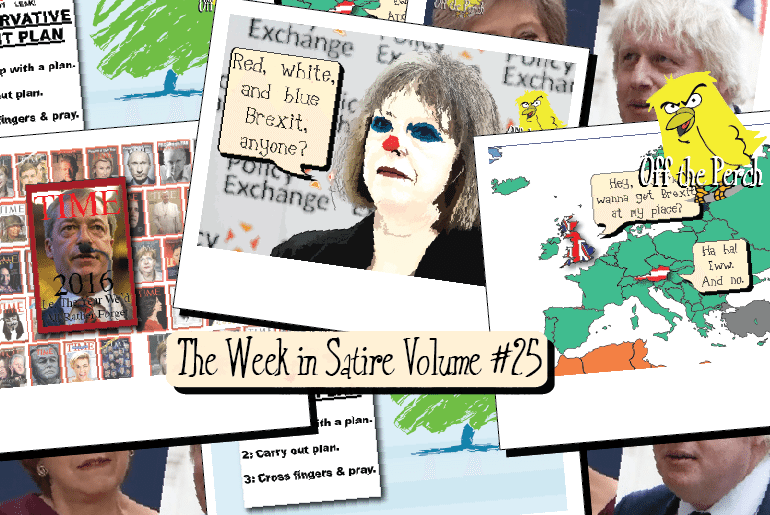 A week in which the government made it clear that the views of Boris Johnson – Foreign Secretary – don’t represent those of the UK.

…as a Foreign Secretary. 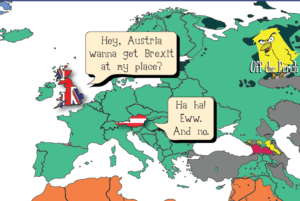 Austrians realise the difference between ‘protest vote’ and ‘societal self-harm’

2016 has so far panned out as a rip-roaring success for the forces of fascism/evil/people who hate iconic musicians. As such, everyone was fully expecting Austria to elect gun-toting xenophobe Norbert Hofer to be its next President. A vote which many would have said was a ‘protest’ against the ‘elites’. ‘Elites’ who basically wouldn’t have been too badly affected either way.

We spoke to an average Austrian citizen named Bertolt Frauer about Hofer’s defeat. We’re not sure what qualified him as an ‘average citizen’, although he was wearing a really plain looking jumper. And that does seem to be the main criterion.

OTP: So what made a majority think that repeating the most awful period in history probably wasn’t the best idea?

BF: At the beginning of 2016, there was this idea that voting for far-right despots represented a blow to the establishment. And then that photo of Farage and Trump in a golden elevator came out, and everyone realised what a massive con it all was. 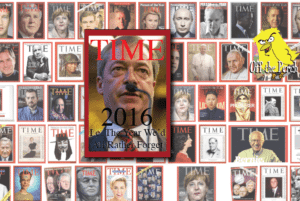 When people heard that Nigel Farage could be Time Magazine’s ‘Person of the Year’, most reacted by vomiting. And then vomiting some more. And then waiting for several hours to see if they could hold down some food. Gingerly eating some digestives and dry toast. And then vomiting until there was nothing left.

But what if Farage is the person who best embodies the spirit of this year? What if he’s the person who most perfectly encapsulates the dismal bilge that the last 12 months have presented? What if Farage is the living embodiment of everything that’s gone wrong? From the rise of global fascism to the admittedly understandable execution of that gorilla?

2016 has been so uniformly terrible that people talk about it as if it’s cursed. We’ve seen the deaths of much-beloved celebrities. We’ve also seen the death of Paul Daniels. On top of that, we’ve seen the world aggressively embracing ‘post-truth’ ideology. And although most of us knew that politics was a foot-long sandwich of horsesh*t before, the sight of people wolfing this unpalatable mess down as if it’s a wedding buffet is indeed something new. Because even though people forced the sandwich down in the past, no one was kidding themselves that it was edible.

And what is Nigel Farage, if not the very embodiment of all this? He’s got the dead celebrity angle going, as he’s basically a zombie Enoch Powell. He’s also got the rancid hot-air side down pat, as he’s made a career from blowing promises out of his arse. So why not make him the grubby fairy that rests atop the half-burnt-out Christmas tree that is 2016? 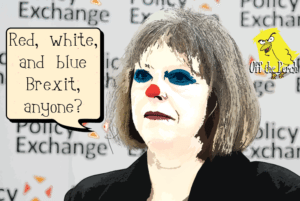 Government accidentally leaks every slogan it considered before ‘red, white, and blue Brexit’

When Theresa May first promised us that “Brexit means Brexit”, people responded to the slogan in three main ways:

You’re kidding me? This? This is the best they could come up with?

THE STUPID! IT BURNS!

“But at least this must be the low point of Brexit rhetoric?” we assured ourselves. “It can’t get any worse than this, right?”

And then came the “red, white, and blue Brexit”. Which means what, exactly? WHICH MEANS WHAT?

Are you talking about the Union Jack? Or are you confirming our commitment to being the good little lapdog that curls up at the bottom of President Trump’s stars-and-stripes bedspread?

Maybe it’s a reference to the fact that you’re making us all look like clowns? 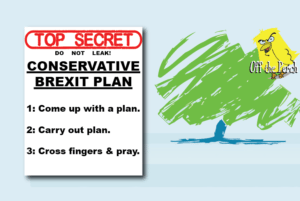 The Labour Party called for the government to explain its Brexit plans, and then set about producing a motion to force it into this. Most political parties supported this, because it would let the public know what to expect from Brexit. And knowing what to expect would obviously enable businesses and workers to prepare themselves better.

The Tories were against it, however. Primarily as they didn’t actually have a plan. And they knew that, if we found out, we’d be madder than a Hacienda rave full of wasps.

The government confused things, though, by adding an amendment to the motion. Said amendment being that if MPs wanted to know their plan, they’d have to agree to enact Article 50 first. Which is… ugh. A pretty terrible deal. Like agreeing to buy a twenty-second-hand Robin Reliant on the condition that you’ll be able to see it after you’ve paid for it. 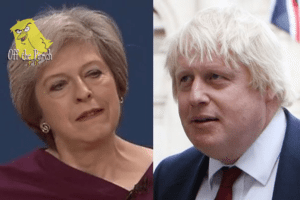 Theresa May: ‘Yes I KNOW I appointed Boris to speak for us, but he bloody doesn’t… alright??’

Screeched Theresa May, clawing at a passing intern’s face and simultaneously kicking him in the groin.

The Prime Minister’s personal man-servant, D’arcy Savage-Cutts, paced alongside her nervously, unsure how to reply:

“I’m sorry ma’am, it appears Boris went off script. Some kind of madcap rant. Spooling some rubbish about honest leaders, decency, an end to proxy wars… that kind of clap-trap. Horrifying stuff.”

May stepped over the sobbing intern, gleefully pouring hot Earl Grey in his face.

God damn that flipping imbecile. Doesn’t he realise we’re up shit-creek?? It’s absolutely paramount we profit from as much war and conflict – as much death and mayhem – as we can physically get our grubby little mitts on right now. I’ve told him a million times!

“Preaching to the choir ma’am. We perpetuate the conflicts, we don’t solve them.”

“Shall I get MI6 on the phone? Dispatch the hounds? How about a car crash in a tunnel? We haven’t done that since…”

… No, no D’arcy. There’s no need. I’ll spank the little albino prick myself. I’ve been looking for an excuse to try out the new clamp.