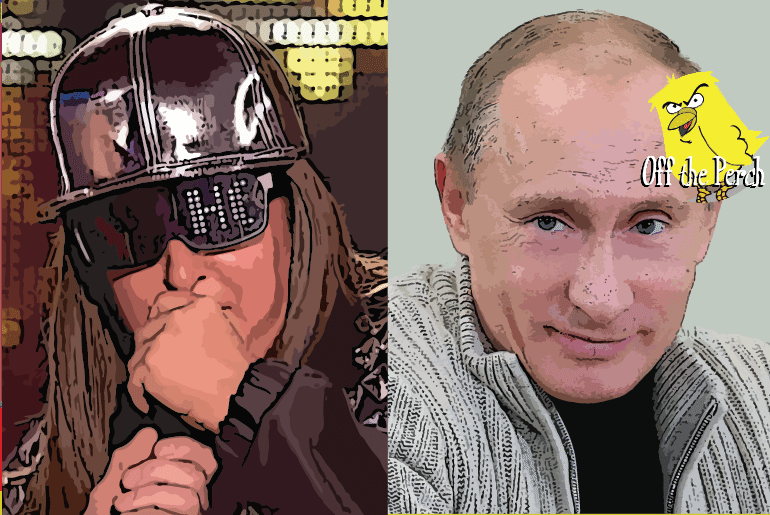 Reality TV rapper Honey G has accused Russia of ruining her X-Factor chances. People aren’t sure if they can write it off as nonsense either, because – you know – it’s 2016. And would Russian hackers rigging the X-Factor be the weirdest thing to have happened this year? Would it even make it into the Channel 4 Top-100? Would it even warrant a response stronger than:

From Russia, with LULZ

Honey G accused Russia of rigging the vote against her because they knew she’d be another huge British pop star. Russia has always been jealous of the UK, as we’ve produced greats such as The Beatles, Bananarama, and Robson and Jerome. Russia, meanwhile, has only produced one pop-combo of note – namely t.A.T.u. And in their case, they were primarily famous for a music video in which wet schoolgirls did lesbian stuff in the rain.

Although, to be fair, All The Things She Said was pretty f*cking poptastic.

But anyway, the allegation goes that Russia was tired of the UK dominating their Top 40 with our Craig Davids and our Throbbing Gristles. As such, they decided to halt a David Bowie-grade future-legend in her tracks with their evil, cold-war computers.

As in her talent. Her talent is very much alleged.

To find out how serious these claims are, we spoke to an expert in Russian espionage:

On the one hand, Western governments have often used Russia as the bogeyman. On the other hand, Russia is verifiably terrible, and has probably done most of what it’s been accused of. They’ve likely also done many things which we don’t even know about, too.

The reality is that most of what comes out of his arse is certifiably foul. But then again, the same can be said of other politicians. And at this point, there’s so much stench that it’s hard to say definitively who produced it.

Vlad to the bone

Vladimir Putin is usually somewhat coy about the accusations against him. Partially because even when he’s not responsible for what he’s accused of, it still plays well at home for people to think that he is.

In this instance, however, Putin has broken his silence to say that he’s actually a big fan of Honey G. He even voted for her at every available opportunity, and is massively into rap music in general. He was keen to stress:

The conspiracy theory is that I’m against the New World Order (NWO), not the NWA. Stupid, decadent Westerners! You can’t even get your stupidity right! I love NWA.

Regardless of whether or not it was fixed, there is one thing on which every news outlet from Macedonia to Manchester agrees. That, even without watching The X-Factor, it’s pretty clear that Honey G is no more terrible than the rest of the contestants.