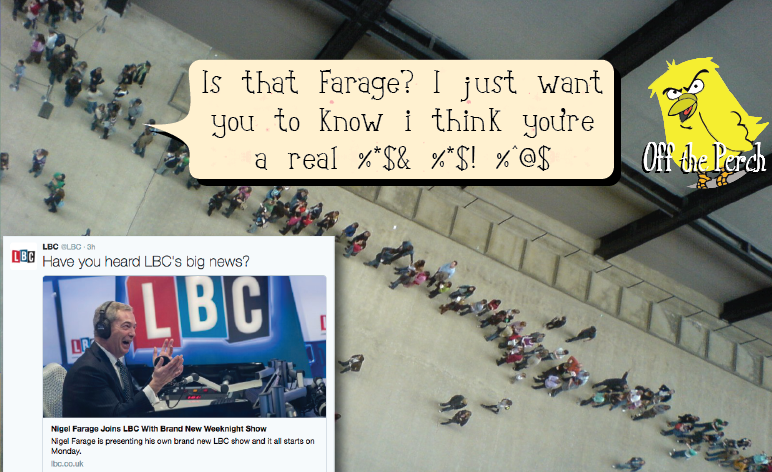 When LBC Radio gave a job to Katie Hopkins, AKA the second worst person in the country, Britons sarcastically asked:

Oh wow, great move, LBC. Why not just just give air-time to a rabid pit bull? Or a disturbed hornets’ nest? Maybe a toilet bowl filled with rats on amphetamine? Or even worse, Nigel Farage!

And unfortunately for the world, LBC doesn’t seem to have picked up on the sarcasm.

Although, to be fair, the disturbed hornets’ nest was busy. And the toilet bowl filled with rats didn’t want to work alongside Katie Hopkins.

We asked several UK citizens what they intend to ask Farage when they call up:

“I heard that you’re supposed to represent working people, Mr Farage. Which is weird, because I saw you hanging about with a load of hunting toffs on Boxing Day. Wearing your yellow trousers and having a laugh.”

“And I don’t necessarily have a problem with the trousers by the way, but I am confused as to how you think joining up with a load of psychopathic millionaires in an effort to separate and savage a defenceless animal (er, I mean trail hunt) is in any way representative of working people? Unless of course you teamed up with the fox. In which case, I suppose you would have been given a great idea of what it’s like for poor people in Great Britain.”

“Stop thinking you can fool people into thinking you’re a man of the people by posing with a pint in your hand. You can slap a medal on a dog turd, mate, but that doesn’t make it an Olympic pole-vaulter.”

Of course, the valiant defenders of free speech are saying we have to listen to these total sh*tters. That we have to give them these broad platforms. And yet – quite weirdly – they don’t seem to be saying we should give a platform to Abu Hamza. Or Ian Brady. Or that woman who put a cat in a bin.

And to be fair, we shouldn’t be giving these horror-bags radio shows. Because they’re terrible. And so is Nigel Farage.

EDITOR’S NOTE: To be fair, The Express did give Ian Brady a platform when he came out as being in favour of Brexit. They’re just public-spirited like that. Always making sure that everyone in society is given a voice.