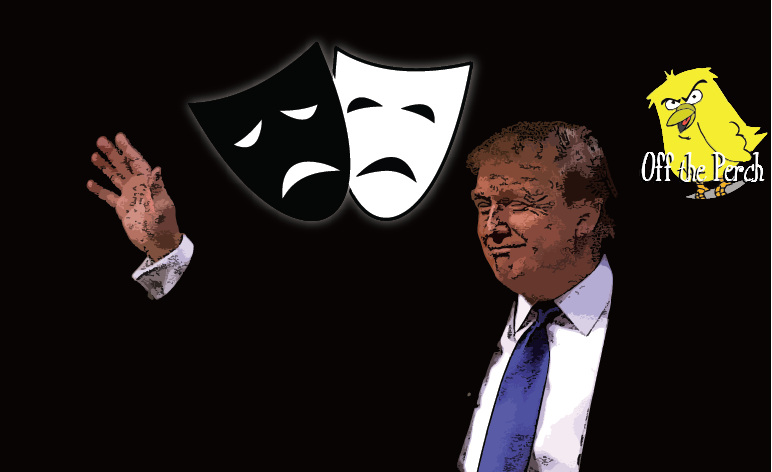 Donald Trump has been engaged in politics for over a year now. A length of time which is actually longer than most of his business ventures lasted for. The ill-fated ‘Trump Steaks’, for example, having lasted only one year. Almost as if people don’t want to think about his tangerine face and road-kill haircut while eating.

As such, it’s not surprising that Trump would grow bored of politics. A boredom which has led him to quit the Presidency completely and take up acting. Which will finally allow him to show Meryl Streep who the greatest actor of them all is.

As a means of attracting a part, Trump has recorded an audition reel of himself. In it, he can be seen performing lines from some of history’s greatest productions. Although, as per usual, the former steak-monger has struggled to stay on script.

“You don’t understand! I coulda had class. *MUMBLES SOMETHING ABOUT HAVING THE BEST CLASS* I coulda been a contender. *MUMBLES SOMETHING ABOUT BEING THE ONE WHO FIRES THE BEST CONTENDERS* I could’ve been somebody, instead of a bum, which is what I am. *THROWS SCRIPT ON THE FLOOR* Are you serious right now!? Donald Trump, a bum!? Donald Trump is the opposite of a bum! Which would make me…. *SOMEONE SHOUTS “A DICK?”. TRUMP PULLS ONE OF HIS DAZED-HAMSTER FACES IN RESPONSE*

Don’t give up your day job

The acting world was obviously terrified of Trump putting them all to shame. But thankfully, Trump became embroiled in an argument with an Uber driver on his way home. As a result, he bought his own taxi and spent the rest of the afternoon ferrying people around to prove he was “the best at cars”.

He later got into another argument. This time with the fireman who was extracting him from the smouldering wreckage of his taxi. Trump assured the gentleman that he could “do fires better than anyone”. Unfortunately, Trump misunderstood the role, though. Which is why he was later arrested for arson, and is currently being held in an NYPD holding cell. A cell in which he’s attempting to persuade the other criminals that “the toughest gangs regard him bigly”.

We’ll let you know how he gets on.