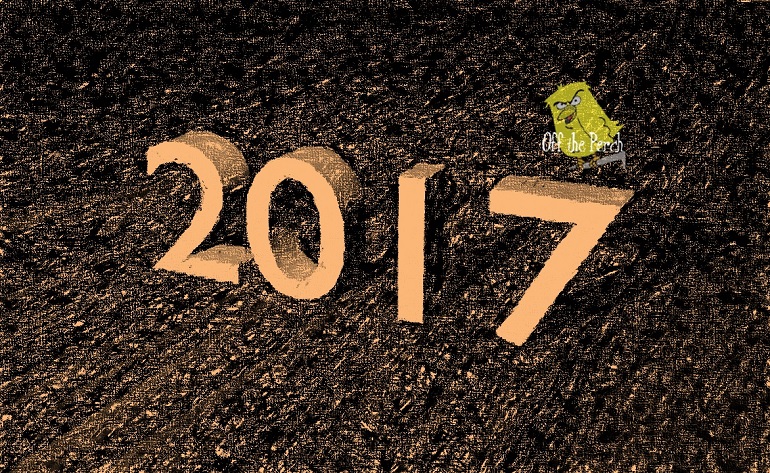 Now that 2017’s here, just between us… 2016 was pretty awful, right? A turbulent 12 months in which “surreal” narrowly beat “fascism” as Merriam-Webster’s word of the year. And a period full of stress and nastiness which the American Dialect Society summed up with the phrase “dumpster fire”.

The biggest dumpster fire of all was probably Donald Trump’s bigoted, arrogant and misogynistic ascent to power. Grabbing one of the world’s most important political positions with all the unceremonious grace of a gassy mountain goat. All with the help of his hopeless opponent. A woman with so much baggage we thought she was preparing for space travel. And a woman who consciously ignored people’s doubts about her ties to big corporations and tyrannical regimes abroad. Meaning the elections were eventually about who the frustrated and disgusted electorate most wanted to vote against.

Oh, and there was Brexit, too. And we all know what a muffin basket of joyfulness that turned out to be.

Essentially, 2016 was a peak in the slow-motion collapse of ‘establishment’ politics. Of the political classes that brought us bank bailouts, wars overseas, and stagnant wages. But these elites were so busy clinking wine glasses of peasant tears that they were utterly shocked when they finally realised what was happening. Their response? To focus their efforts on shutting out a popular left-wing alternative while allowing an opportunistic far right to take over.

To find out, Off The Perch asked its resident soothsayer – Miss Fortune – for a sneaky peak at what to expect in the new year.

After speaking to a load of empty seats on 20 January, the man with the orange mask launches a campaign against windmills. He says they mess with his hairdo. ‘Oil fountains’ simultaneously pop up around the USA, though. As do tankers and pipelines.

Petrol prices rise. And Valentine’s Day sees the orange American overlord hold hands with a goatee-wearing pensioner with a big sword. In return, America brings destructive gifts to the swordsman and miraculously forgets all his misdemeanors.

A posh British gentleman with an old red briefcase takes less money from the rich and more services from the poor. Across the sea, a white-haired xenophobe shakes the Netherlands to its core just as Britain finally starts its messy divorce from the EU. The EU soon gets to keep the kids, the house, and the car.

Britain gets the cat.

Over in Turkey, President Fishsticks finalises the country’s descent into dictatorship by installing his moustache as the undisputed leader of all that is Turkish. Any insults of the moustache result in the destruction of whole towns. And anyone who looks directly at the moustache faces imprisonment. So essentially, business as usual.

Britain’s 2017 local elections are just as uninspiring as usual, but the presidential polls in France come to a shocking conclusion as a stern-looking blonde lady with fascist roots rides on the coat-tails of the all-powerful American satsuma to become the next French president. In the same month, said leader of the fruit world rocks the Iranian elections by insisting that the country’s religious leaders were actually born in Wolverhampton.

The lady running the small island slowly drifting away from Europe meets her continental counterparts, who proceed to ignore her. She smiles uncomfortably and settles for talking to passing waiters in a local gastro-theatre in slow, broken English.

America’s man-baby-in-chief and dark-lord of bankruptcy meets his topless Russian counterpart at the G20 summit. Between fits of laughter, the latter gives the former the hand-measuring contest he’s been asking for since January.

The former first lady who refuses to quit while she’s ahead finally botoxes the shocked look off her face and, after months ploughing wheelbarrows of money into the offices of powerful music executives, arrives at the MTV Awards to give her acceptance speech for Best Female Video. “Victory at last!” she shouts. But Kanye West soon jumps up on stage, takes her microphone, and says: “Yo, Hillary, I’m really happy for you and I’m gonna let you finish, but Beyoncé had one of the best videos of all time”. And in all fairness, she probably did.

The indestructible moon-lady leading Germany for the last few centuries faces a strong electoral challenge from a popular left-winger. Looking her young competitor in the eye while muttering the German equivalent of “you shall not pass”, the moon-lady accidentally allows a group of right-wing emu farmers in through the back door.

After months of people ignoring her and falling asleep when she talks, the tartan-clad clown lady of East Sussex finally floats off into the atmosphere because of all the hot air trapped inside her body. But her friend BoJo the Clown has an ingenious idea. He commissions a gigantic buffoon balloon, using the hot air generated to tour the world shouting offensive phrases at those below.

On bonfire night, the supporters of King Donald the Orange celebrate a year of his eternal wisdom with a massive transcontinental dumpster fire. At events around the world, people burn all the remaining dictionaries, encyclopedias, and history books. Only Twitter matters now.

The numbness most people experienced during the 2016 festive period finally wears off. But emerging from the haze, people realise 2017 has been just as bad.

At Off The Perch, we sincerely hope that Miss Fortune’s predictions for 2017 are wrong. Mostly because they’re not very nice. Or funny. But judging by the cluster bomb of self-destruction that was 2016, we suspect some of them may be spot on.