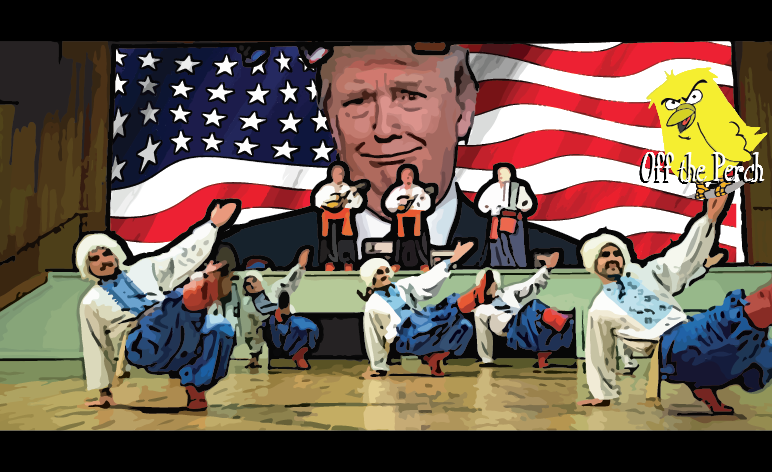 Everyone knows that Trump has been struggling to find first-rate performers to play at his inauguration. The incoming President having so far been turned down by:

Yet he has managed to find someone to perform for him. Someone who looked at the global reaction to the greasy, comb-over bigot and thought:

You know what, people might not like this guy, but he has offered to pay me money, so f*ck it.

The person in question being ‘The Lord of the Dance’ himself, Michael Flatley. But unfortunately for the one-time Riverdancer, the dance he’s been booked to perform is not the one that he’s famous for.

Not blatant at all

According to a White House insider, Flatley turned up to practice and was greeted by Trump himself. When the dance troupe began performing its trademark Irish show, however, Trump became irritated. When they stopped, the President-elect approached them and said:

Okay, okay, that’s a very nice jig. But you’re not doing that on the night, right? I mean, something like that, sure. But you need to squat more.

A shocked Flatley stared at Trump and asked “squat more”? Without missing a beat, Trump responded:

He then proceeded to perform a very accomplished Hopak, which many will know as ‘that Russian squat dance’. This prompted several of Trump’s aides to rush over and ask him to stop doing the signature Russian (or Ukrainian) dance in public. The President-elect carried on dancing, however. Assuring them that his technical mastery of the iconic performance in no way implied he’d had more dealings with Russia than he admits. Although they didn’t actually understand him, as he’d accidentally slipped into Russian while talking.

Lord of the Flounce

Flatley did apparently consider reneging on his contract when he discovered Trump’s plans. But then remembered he was going to get paid. And that he basically just doesn’t give a f*ck.

Which means we do still have all that to look forward to. Along with some dancing bears, and a performance by everyone’s favourite pop-duo, t.A.T.u.