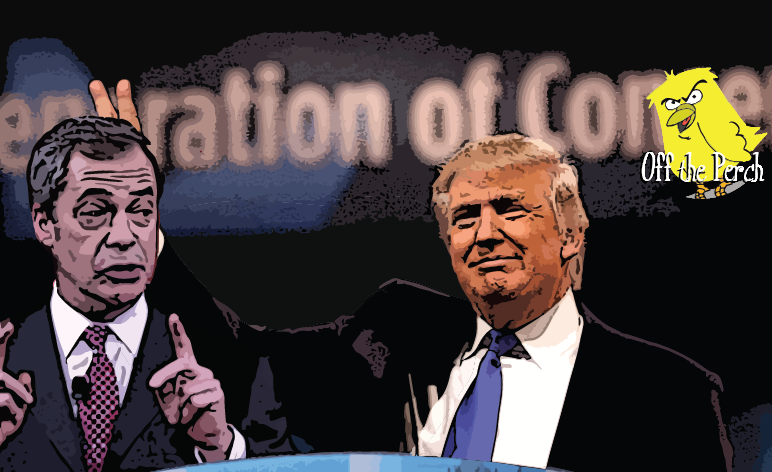 The UK’s unofficial ambassador to the forces of darkness, Nigel Farage, has returned from the hell mouth with news. Namely that Donald Trump’s new slogan, America First, will mean exactly what you think.

Off The Perch (OTP) caught up with Nigel Farage to ask him what a radically isolationist America will mean for Britain:

OTP: “So, Nigel. Trump has said that America needs to get back to buying and hiring American. Obviously, that will be at odds with us exporting to them, right?”

NF: “Sorry, I was just thinking about the angler fish.”

NF: “Well, the thing about the angler fish is that the females are much larger than the males. And when they breed, the male bites into the side of the female and never lets go. Eventually they shrivel up, and spend the rest of their life passing valuable nutrients on to their partner.”

OTP: “Oh my. That sounds hideous for the male.”

NF: “You think? I was just thinking how wonderful it must be.”

NF: “So what if it is? Trump’s nothing like those sneaky Europeans! God I hate them! Always talking behind my back in French! Like I don’t know what they’re saying about me! THEY’RE SAYING THAT I’M INSECURE! BUT I’M NOT!”

If this sounds familiar, it's because Donald Trump is currently in the process of slowly absorbing Nigel Farage pic.twitter.com/IpnWpVlHiY

Isolationists of the world… unite!?

Obviously, there’s a lot of people wondering why all these nationalist types are suddenly becoming best friends. It’s because Farage thinks the UK is the best. Trump thinks America is the best. Marine LePen thinks France is the best. Vladimir Putin thinks Russia is the best. And whatever toe rag they have representing the far-right in New Zealand thinks New Zealand is the best.

So what do they have in common? Surely, they should all be at odds?

Unless of course—and bear with me on this—they’re all using patriotism as a means of co-opting disenfranchised people into a fascist system in which they’ll use racism and minority-blaming as a cover for a comprehensive global power-grab?

But no—that could never happen again, right? Because it’s like they say, “history never repeats itself”.