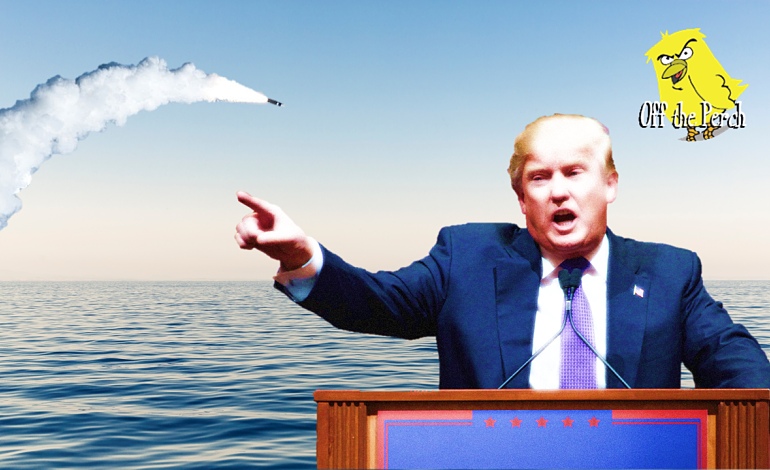 Theresa May is facing mounting pressure to spill the beans over last year’s massive missile balls-up. The government has refused to confirm or deny the most obvious explanation – namely that this was an attempt to kill Donald Trump.

In June 2016, Trump had emerged as the likely Republican candidate for the US presidency. He was regularly campaigning in Florida. The UK had a Vanguard class submarine, aptly named HMS Vengeance, stationed off the Florida coast. The sub was due for its missile firing test. At £17m a pop, these don’t happen too often. But HMS Vengeance was fresh from a £350m spruce-up so it was a chance to test the new gear.

Even the British deep state, no stranger to horror, was appalled at the thought of a Trump presidency. So plans were hatched, coded messages were sent, and the countdown began. Trident missiles are normally tested by firing them towards Africa, in case anything goes wrong. They can hit a target from 5,600 miles. On this occasion, technicians had to dial down the boosters in order to try and strike a basketball arena only a few hundred miles away.

It may be that this attempt to use a long-range weapon for a medium-range job is what caused the problem. In any case, the missile neither shot across the sky as usual, nor demolished The Donald. Instead, it flopped into the sea somewhere off the US coast. One theory gaining currency on the dark web is that the missile’s targeting system, programmed to recognise the top of Trump’s head, was confused by a species of wafty orange jellyfish common in the western Atlantic in mid-summer.

The Ministry of Defence has issued a briefing intended to calm any fears:

UK citizens should not worry that this latest (alleged) incident renders our independent nuclear deterrent any less effective. In an actual theatre of war, the fallout and nuclear winter caused by multiple warhead detonations would probably kill most of our enemies eventually regardless of where the missiles land.