Puddle of vomit pulls out of Piers Morgan interview - Canary 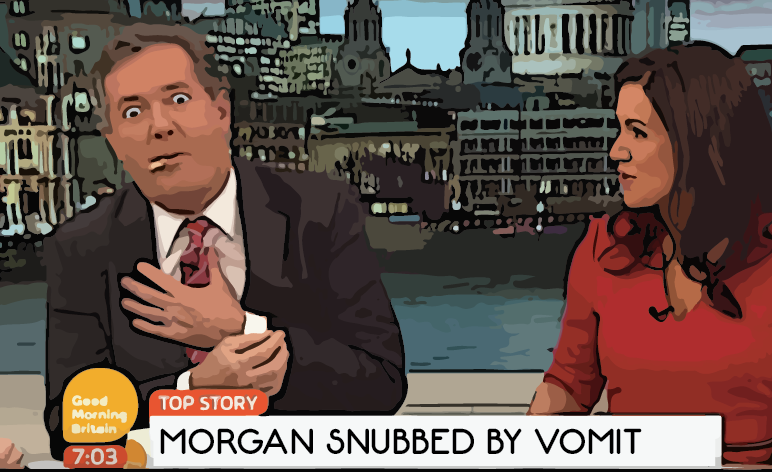 A festering pool of puke has pulled out of a TV interview after discovering who the host was. Said host being none other than Piers Morgan. A man who is most famous for being a failed/disgraced:

The UK is divided into people who think Piers Morgan is an oily sack of pompous insecurities, and those who simply don't know who he is

Ewan McGregor also pulled out of an interview. Primarily due to comments that Morgan made about the global women’s march.

This #WomensMarch wasn't about equality, it was about Trump-bashing, bomb threats & hateful jibes at other women. https://t.co/I3tiGQHxDN pic.twitter.com/IPua1whRe5

Morgan complained that McGregor was against people having opposing opinions. Other people assumed that he probably just didn’t want to share oxygen with a scoundrel so greasy he could wriggle his way out of a rugby scrum. A rugby scrum that was trapped below the rubble of a collapsed building.

Was going on Good Morning Britain, didn't realise @piersmorgan was host. Won't go on with him after his comments about #WomensMarch

Others have pointed out that if McGregor allowed himself to be interviewed by this abominable horror-clown, it would give viewers the impression that Morgan was a viable human being.

Which he isn’t. Because a society of people like him would immediately descend into a self-inflicted frenzy of arse-kissing, back-stabbing, and muck-slinging. He is the epitome of what happens when people are lacking in brains and yet brimming with confidence. So much confidence that it drips out of them like garlic mayo from a discarded kebab. And yet his contribution to any debate can usually be summed up as:

I don’t really understand what’s going on here, but here’s my opinion anyway.

Off the Perch caught up with the vomit to ask why it had ducked out of the interview:

I may be a puddle of vomit. A puddle of vomit which originated from a diseased and rabid camel. A diseased and rabid camel which ate several traffic wardens. Several traffic wardens who were really big fans of U2. And not U2 from the 80s and 90s either; U2 from the time when they had to force albums on people via iTunes. And yet even I can see that Piers Morgan isn’t worthy of my time.

Morgan responded by going on a four-day Twitter rant. A rant in which he once more got on to ranting about ‘rabid feminazis’ attempting to emasculate his gender. A rant which harkened back to the classically masculine silent types of classic cinema.

I'm planning a 'Men's March' to protest at the creeping global emasculation of my gender by rabid feminists. Who's with me?

Because who can forget that great scene from The Good, The Bad, and The Ugly when Clint Eastwood bullishly affirmed his masculinity by snarking at people from a safe distance.

Which isn’t to say that giving people the business from the comfort of your own home isn’t fantastic, of course.

How am I only just learning that 'Piers Morgan' is an anagram of:

But it is to say that it’s a weird way for someone to publicly affirm their manliness.

Because there’s nothing wrong with people having strong masculine traits. As long as they’re not an arse about it.

But Morgan doesn’t have these characteristics. And yet he’s still a f*cking arse about it anyway.