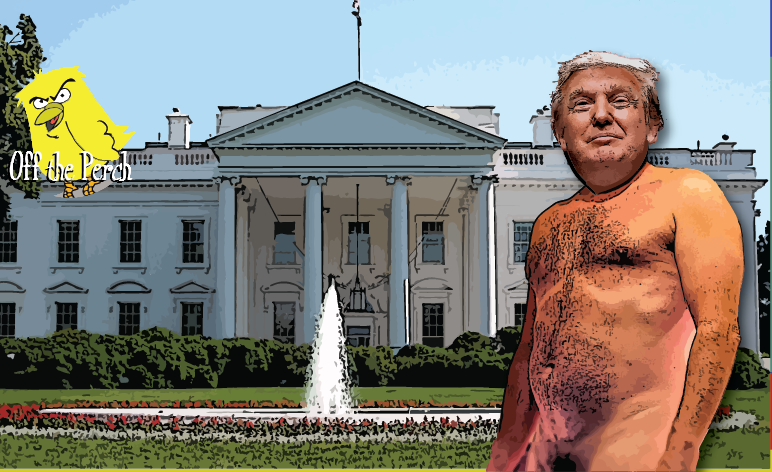 People feared the worst from Theresa May’s trip to visit Emperor Trump. The UK finds itself in a historic moment of weakness. A point at which we’d basically have to accept any deal that was offered to us. Which is great for Trump, as he’s at a point of wanting to force sh*tty trade deals on other countries. Because he honestly thinks that other people doing well is a sign that he’s doing badly. Because he’s an arsehole.

And yet, through a mixture of blind panic and luck, the PM actually managed to get us a deal.

Here's Theresa May at the front of the queue for trade talks with the USA pic.twitter.com/tUEVJeEgzm

Dumpster fire of the vanities

The trade talks began pretty much as expected. Which means Trump accidentally referred to May by the following wrong names:

May had made it clear she was willing to hand over the NHS, and Trump made it clear he’d accept. And so the tangerine mandarin told her:

Mmm hmm. Let’s make the NHS great again. We’re going to build an NHS so big that people will be afraid to get sick. But what else have you got for me?

"We can't reveal our position"

"Here! Take the NHS! It's yours! Take whatever you like!"https://t.co/BUzOPZmiSp

The PM squirmed as she was forced to hand over industry after industry to the insatiable Emperor. And it got to a point at which Britain had nothing left to give. Which isn’t entirely true, actually. Because the PM did try to give away Jamie Oliver, but Trump didn’t want him.

This meant that after several long hours of negotiating/handing out infrastructure, May was desperate. Which is to say she was more desperate than she was at the start, anyway. And Trump sensed this desperation, and duly went in for the kill:

Look, Tina, I’m a busy guy. And I want to give you a good deal, but I’m not seeing what’s in this for me? So why don’t you sign over Hogwarts School of Witchcraft and Wizardry, and we’ll call it even?

A mixture of tiredness and despair led to May countering:

I’m afraid that I can’t sell you Hogwarts, Donald, because… well… let’s not get into that. But there is something I can offer you. And it’s this… err… alt-clothing and crown set! And if you accept, you’ll officially be the alt-king of Great Britain.

May held up the alt-clothing. Which is to say she held her arms up and pretended to hold something. A sight which led to Trump pulling his pouty-face and asking “that’s it?”. To which May responded:

Oh yes, Donald. It’s made of the finest alt-silks from Alt-ghanistan. Alt-silks which were magically treated at Hogwarts so that they’re invisible to the wearer. Because… err… it makes it easier to see if your phone is in your pocket, I guess?

So everyone can see these clothes except me?

“Mmm-hmm”, the PM responded, before gulping more transparently than she would have liked.

Trump fell for the ruse completely, of course. And as soon as he was dressed in his alt-regal outfit, he ran to the pressroom to rub it in the media’s faces. The most common question of course being:

Why aren’t you wearing any clothes? Or shoes?

But Trump knew not to listen to their conniving, liberal lies, and duly shouted at them:

After berating the press, he ran outside to see the real people – his supporters – to brag about being the king of England.

But he wasn’t, of course. And the people stared at their little Emperor in his fancy alt-clothes, and they caught up to the rest of us. Which is to say that they thought:

And then they took photos of his orange, Presidential penis. Because of course.