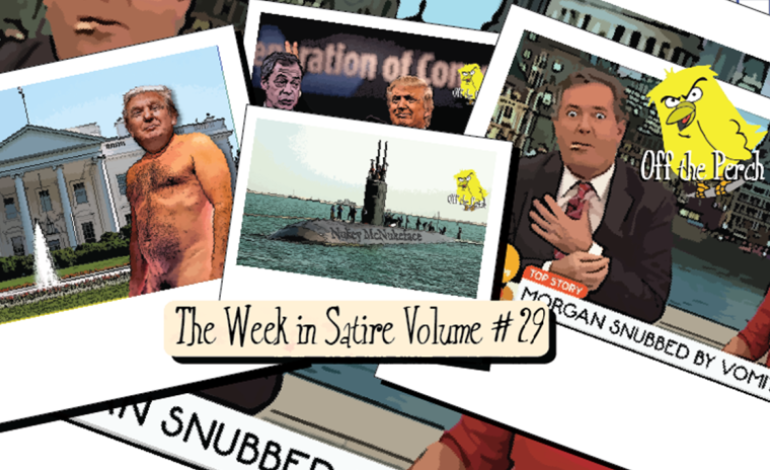 A week in which Piers Morgan crawled out of Donald Trump’s arse for just long enough to disappear up his own. A week in which the government wrote ‘Brexit means Brexit’ on a bit of white paper and claimed that constitutes a plan. And a week in which lies rebranded themselves as ‘alt-facts’. 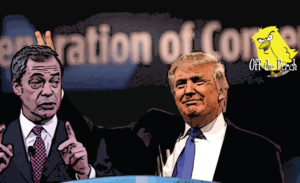 The UK’s unofficial ambassador to the forces of darkness, Nigel Farage, has returned from the hell mouth with news. Namely that Donald Trump’s new slogan, America First, will mean exactly what you think. 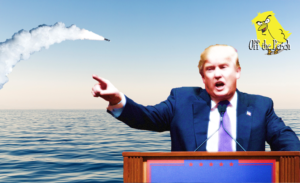 Theresa May is facing mounting pressure to spill the beans over last year’s massive missile balls-up. The government has refused to confirm or deny the most obvious explanation – namely that this was an attempt to kill Donald Trump.

In June 2016, Trump had emerged as the likely Republican candidate for the US presidency. He was regularly campaigning in Florida. The UK had a Vanguard class submarine, aptly named HMS Vengeance, stationed off the Florida coast. The sub was due for its missile firing test. At £17m a pop, these don’t happen too often. But HMS Vengeance was fresh from a £350m spruce-up so it was a chance to test the new gear. 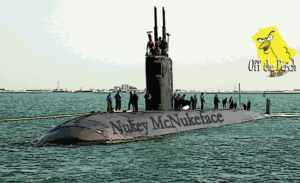 Following an embarrassing, fumbled, and arse-headed denial, the PM has come clean. Namely by admitting that yes, she did know Trident misfired, and no, she didn’t pass that information on. And yet, she has also come up with a plan that could see her emerge from this cesspit of scandal relatively un-filthed. A plan which would see the Trident submarine, HMS Vengeance, renamed Nukey McNukeface.

ISIS now thinking that if they provoke the UK, we'll respond by accidentally firing all of our nukes at Florida#trident #fuckme #deterrent

Some people were shocked to discover that one of our nuclear submarines was called HMS Vengeance. Although what else would you call it? It’s designed to revenge-kill several cities’ worth of innocent civilians, so you can’t call it HMS Rational. Although it could be called something less dramatic, like HMS Spite-Fire or HMS F*ck You Too. Or, going off the recent failed test, HMS Premature Retaliation or HMS Whoopsie. 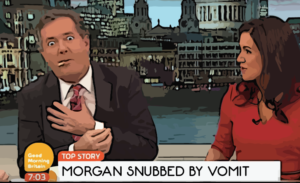 Puddle of vomit pulls out of Piers Morgan interview

A festering pool of puke has pulled out of a TV interview after discovering who the host was. Said host being none other than Piers Morgan. A man who is most famous for being a failed/disgraced:

The UK is divided into people who think Piers Morgan is an oily sack of pompous insecurities, and those who simply don't know who he is 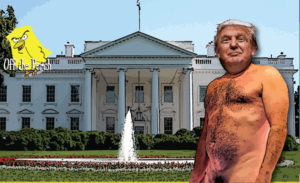 Emperor Trump given alt-clothes in exchange for trade deal

People feared the worst from Theresa May’s trip to visit Emperor Trump. The UK finds itself in a historic moment of weakness. A point at which we’d basically have to accept any deal that was offered to us. Which is great for Trump, as he’s at a point of wanting to force sh*tty trade deals on other countries. Because he honestly thinks that other people doing well is a sign that he’s doing badly. Because he’s an arsehole.

And yet, through a mixture of blind panic and luck, the PM actually managed to get us a deal.

Dumpster fire of the vanities

The trade talks began pretty much as expected. Which means Trump accidentally referred to May by the following wrong names:

May had made it clear she was willing to hand over the NHS, and Trump made it clear he’d accept. And so the tangerine mandarin told her:

Mmm hmm. Let’s make the NHS great again. We’re going to build an NHS so big that people will be afraid to get sick. But what else have you got for me?