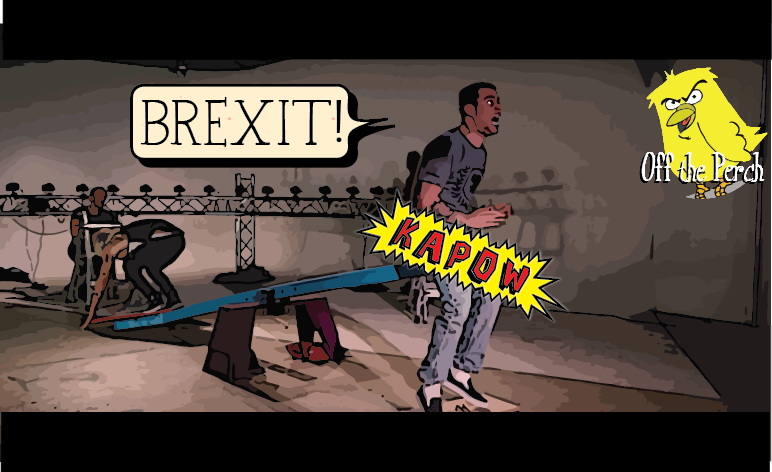 A new study has revealed that “Brexit!” has replaced “Bastard!” as the nation’s favourite curse-word. The word that you shout when you unexpectedly stub a toe. Or when you get struck in the crotch by a wayward billiard ball. Or even when find yourself being dragged out of a political union you were distantly fond of.

The study was conducted by the good people at The Preston Dictionary. A dictionary which is less prestigious than Oxford or Cambridge, but slightly more respectable than Blackpool. The latter dictionary containing only 56 words. A number which is dwarfed by Preston’s mighty 87.

I should probably mention that I do originate from Preston, and I’m also on The Preston Dictionary’s board of directors. Although the rumours that I accept cash in return for fast-tracking words are of course spurious. And it’s just a mad coincidence that I changed the meaning of the word ‘trump’ from:

On the same day that I got a suspicious payment from a well-known shell company. I don’t even know why I’m referring to it as suspicious, actually. It was seriously legitimate.

But anyway, the test in question involved throwing copies of The Blackpool Dictionary at passing strangers to see how they’d react.

In the past, the most common response was either:

But now the most often-repeated word is:

We spoke to one of the people we struck to find out what was going through his head:

I don’t know what made me shout that. I don’t think I was even thinking about Brexit. But then again, I probably was, BECAUSE IT’S THE ONLY THING ANYONE FUCKING TALKS ABOUT ANYMORE!

We also spoke to a top scientist to find out the science behind it. Or at least we think it was a top scientist anyway. He could potentially have been a meth cook. Although he didn’t try to sell us that much meth really:

It isn’t only being used as a curse-word. Brexit has become so prevalent that people are spontaneously saying it out loud. Like a nervous tick. Some people are using it as a filler word like ‘erm’ or ‘like’. Some people are writing it instead of their own signature. Others are shouting it during climax, before embarrassedly beating a hasty sexit.

At the current trajectory, we’re predicting that by 2020, all UK discourse will consist solely of people shouting the word ‘BREXIT!’ at one another. Which could even be slightly worse than things are already.

According to scientists, the predicted increase of people saying Brexit is only expected to increase.

In other words, if you feel like you’re sick of it now, then you ain’t seen nothing Brexit.

Or did I mean Brexit?

I don’t even Brexit.