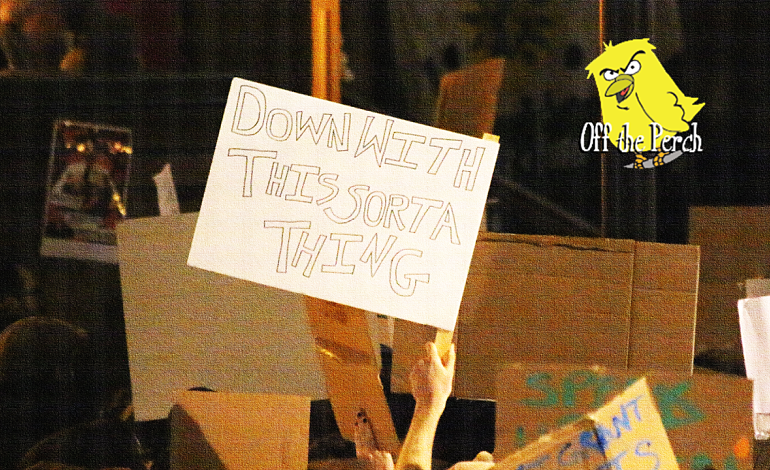 At Off The Perch, we’ve had to put up with an irritating right-wing intern, Frank Lee-Bull, due to a little-known government directive aimed at achieving “balance” in lefty satirical websites. Thankfully, he went away to the US for a 15-week-long ‘Trump Party’, which began before the election and continued long after the inauguration. But now he’s back. And he’s furious.

All over the world, bad people are hitting the streets to protest against President Trump. And it’s disgraceful. Don’t they want America to be great again? Aren’t they glad he saw off Shillary / Dollary / Killary? Can’t they see how important it is to ban people from countries that might possibly some time in the future do something bad in the US? And make sure that all Americans are armed to the teeth to defend themselves? Even if they’re not quite the full cake?

But, of course, we know why they’re really doing it. Why they’re out there with their homemade placards and their rhyming chants. Money. Good old fashioned moolah. These protesters – I don’t think we can even call them protesters – these AGENTS are working for the New World Order. They’re being paid by George Soros. It’s true. Even the President’s Oracle of Super-Truth, Sean Spicer, agrees. The whole thing’s a massive fake. Probably the biggest fake ever. So I went out to discover the truth. At a blatantly professional rally in Norwich run by people who are probably part of the Bilderberg Group.

Frank Lee-Bull (FLB): “Jemima, you’re one of the ringleaders here. Are you part of the New World Order?”

Jemima: “No, I’m a student. I study International Development and I’m concerned that…”

FLB: “Trevor, you’re a local passerby. I’ve heard that Norfolk types don’t usually go out after dark. How come there are hundreds of people here?”

Trevor: “Well, it’s obviously something they care about. You can see it in their hopeful defiant faces. It’s actually really impressive.”

FLB: “You know they’re only here because they’re being paid by George Soros?”

Trevor: “Are you on drugs? Are you a real reporter?”

FLB: “Ibrahim, I’m guessing you’re an ‘out-of-towner’. Did you get here on a paid bus?”

Ibrahim: “No. I walked here from my house. The house where I grew up. I think you might need to update some of your ideas.”

FLB: “But you’ve been paid to come, right? How do they do it? Brown envelopes in secret PO boxes? Or is it gold? Maybe Jewish gold? Money’s no object to these people.”

Ibrahim: “Nobody paid anyone. What are you even on about? Is this like a wind-up show or something?”

So there you go, outright denial. Not one of the people I spoke to was willing to admit they were a professional protester. But I got an even more shocking revelation from an elderly gentleman in a donkey jacket:

FLB: “David, with all due respect, you seem like you should have retired from this sort of professional protesting nonsense.”

David: “Now listen to me you ridiculous little bigot, or I might have to break a tradition of pacifism which began when I marched to Aldermaston at the age of seven with my grandad. I’ve been on hundreds of marches. I’m still coming out because the world is still run by idiots. Trump is the latest idiot, and possibly one of the most dangerous. That’s why I’m here with my daughter and my grandkids. It’s their world now.

No one ever paid me to do this. I’ve probably spent thousands of pounds over the years on coach tickets, packed lunch ingredients, and banner-making stuff. The most I ever got in return was a bean burger from Food Not Bombs. Apart from the satisfaction of knowing I’ve spent my life well. That I’ve stood up for truth and decency. That I’ve done my best and tried my hardest. I’m glad there are millions of other people trying to do something as well, even if it’s their first time and perhaps they never seemed bothered before. Everyone has to have a first time.

But d’you know what? If I was a professional protester, I’d be having a word with my employer about the pay rate. Ha ha ha! I’d probably be getting everyone together to call for the Living Wage to apply to protesters. Ha ha! You idiot.”

Chilling. And a sign of further mayhem we can expect in the next few weeks. Sad!

We can only, once again, apologise for Frank Lee-Bull. He’s not our fault. I told him I was worried by the increasing number of Trumpisms in his writing, and by the fact he’s had his hair done like Richard Spencer. But he called me a “blue pill snowflake”, said “I’m here. Get over it!”, and stormed off.