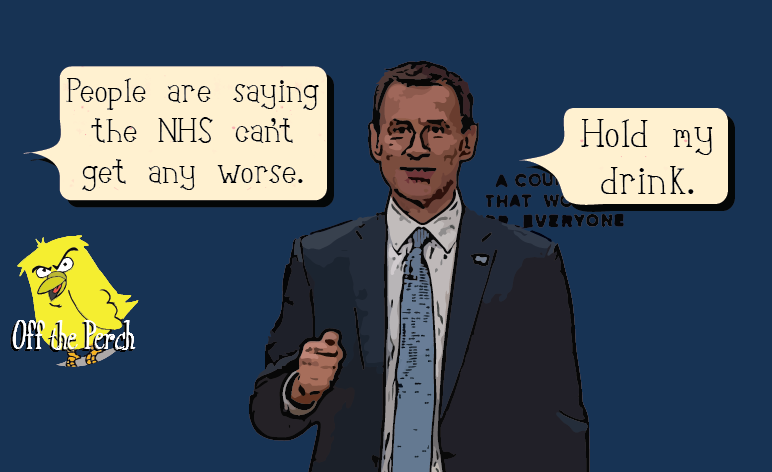 Jeremy Hunt is the UK’s longest serving health secretary. And by sheer coincidence, he’s also presided over one of the health service’s longest ever periods of decline.

But is it just a coincidence?

Off The Perch (OTP) caught up with him to find out more.

OTP: Jeremy, you’ve admitted yourself that NHS performance is “completely unacceptable”. So what do you intend to do about that?

JH: Well, obviously I need to make it worse somehow, but I’m running out of ideas if I’m honest.

OTP: Sorry, did you just say worse? As in not better?

JH: I did! Yes! Wow! You won’t believe how good it feels to finally admit that!

OTP: This is unbelievable. So you’re saying that you’re intentionally running the NHS into the ground like a eighth-hand Peugeot 306?

JH: Well duh! Did you not notice? I’m the first to admit that I’ve got all the mental excitability of a congealed vat of high school gravy, but even I’m not stupid enough to have done this badly accidentally. No, no, no. This level of pig-headed sabotage requires a steely determination and a crack team of soulless free-marketeers.

OTP: I mean, yeah. I suppose it was obvious. And we all knew it. But it is still surprising to hear you say it out loud. And I wonder why you’re coming clean now?

JH: Things are just working out in our favour, basically. Hard Brexit is going to free us from a lot of red tape, and during my secret meeting in America, I got Steve Bannon to promise me that if Labour ever starts doing well in the polls, he’ll get Trump to personally nuke Jeremy Corbyn.

OTP: Oh dear. And you say you still plan on making things even worse?

JH: Somehow, yes. Although I’m not sure what else we can do. We’ve underpaid staff, we’ve over-worked them, we’ve under-appreciated them, we’ve threatened to deport them, and we’ve even exposed them to the oily tentacles of Richard Branson’s privatisation monster. And yet still these freaks want to save lives. I can’t get my head around it at all!

The Hunt becomes the hated

Despite Hunt having come clean, there are still some people who refuse to accept that the Tories are tanking the NHS for their own personal gain. And those people are the ones who stand to profit from its privatisation.

Nobody else could possibly be surprised at this point.