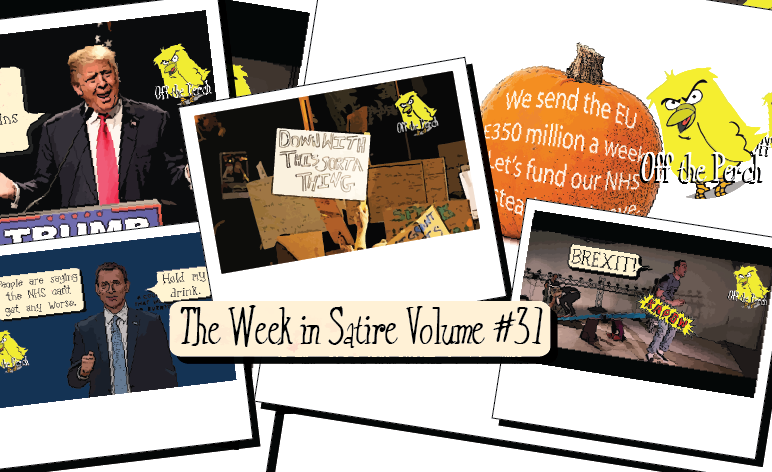 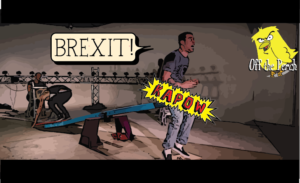 A new study has revealed that “Brexit!” has replaced “Bastard!” as the nation’s favourite curse-word. The word that you shout when you unexpectedly stub a toe. Or when you get struck in the crotch by a wayward billiard ball. Or even when find yourself being dragged out of a political union you were distantly fond of.

The study was conducted by the good people at The Preston Dictionary. A dictionary which is less prestigious than Oxford or Cambridge, but slightly more respectable than Blackpool. The latter dictionary containing only 56 words. A number which is dwarfed by Preston’s mighty 87.

I should probably mention that I do originate from Preston, and I’m also on The Preston Dictionary’s board of directors. Although the rumours that I accept cash in return for fast-tracking words are of course spurious. And it’s just a mad coincidence that I changed the meaning of the word ‘trump’ from:

Trump explains how he crafts his ‘bigly smart’ ideas

If there’s one thing we can all agree on, it’s that Trump doesn’t formulate ideas like anyone else. In fact, we can probably agree that when it comes to brain activity, the guy is barely even human.

But how does Trump concoct these super-thoughts of his?

I call my own shots, largely based on an accumulation of data, and everyone knows it. Some FAKE NEWS media, in order to marginalize, lies!

Many assumed this tweet was in response to accusations that Steve Bannon is the one ‘calling all the shots’. It’s since emerged that it was Trump’s way of hinting at the ‘Sherlock-like’ manner in which he generates his ideas.

I have the best ideas. People can’t believe it. They ask me how I smart them so bigly. I usually don’t talk about it, because I’m a modest guy. Seriously. So modest. I make Mother Theresa look like Lady Gaga. I could talk all day about how modest I am. But- hey, what were we talking about again?

Oh yeah, my genius brain-biglies. And I’ll tell ya, I’m a lot like that British private dick, Shylock Holmes. He’s a serious dick. And I’m somewhat of a dick myself, of course. People tell me all the time. They make signs about it 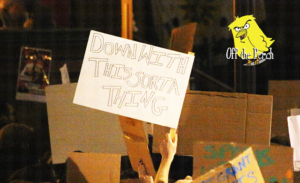 At Off The Perch, we’ve had to put up with an irritating right-wing intern, Frank Lee-Bull, due to a little-known government directive aimed at achieving “balance” in lefty satirical websites. Thankfully, he went away to the US for a 15-week-long ‘Trump Party’, which began before the election and continued long after the inauguration. But now he’s back. And he’s furious.

All over the world, bad people are hitting the streets to protest against President Trump. And it’s disgraceful. Don’t they want America to be great again? Aren’t they glad he saw off Shillary / Dollary / Killary? Can’t they see how important it is to ban people from countries that might possibly some time in the future do something bad in the US? And make sure that all Americans are armed to the teeth to defend themselves? Even if they’re not quite the full cake?

But, of course, we know why they’re really doing it. Why they’re out there with their homemade placards and their rhyming chants. Money. Good old fashioned moolah. These protesters – I don’t think we can even call them protesters – these AGENTS are working for the New World Order. They’re being paid by George Soros. It’s true. Even the President’s Oracle of Super-Truth, Sean Spicer, agrees. The whole thing’s a massive fake. Probably the biggest fake ever. So I went out to discover the truth. At a blatantly professional rally in Norwich run by people who are probably part of the Bilderberg Group.

Frank Lee-Bull (FLB): “Jemima, you’re one of the ringleaders here. Are you part of the New World Order?”

Jemima: “No, I’m a student. I study International Development and I’m concerned that…”

The £350m Brexit bus has turned back into a pumpkin

Once upon a time, there was a country called Great Britain. Great Britain was ruled by a wicked pig-canoodler named David Cameron. A man who possessed the decisiveness of Goldilocks and the forward-thinking smarts of the boy who cried wolf.

Pork-fondler Dave had made sure that Great Britain was as revolting as possible for the peasant folk below him. And yet despite this, many of his court jesters felt the country was still not revolting enough.

A cavalcade of fools

The gammon-romancer had surrounded himself with fools, clowns, nincompoops, oafs, blockheads, buffoons, dopes, berks, and Boris.

Boris Johnson being a man who occupies an unfortunate position all on his very own.

Several of these nefarious scoundrels objected to life under the hog-hugger. Numbered amongst them were:

Between them the pair had nay enough brains to pass the ‘write your name here’ section of an IQ test. In fact, if brains were little pigs, they wouldn’t have enough for a yarn about seven dwarves. And yet Gove did have something which gave them the advantage. Namely a fairy godmother who could grant him one wish. 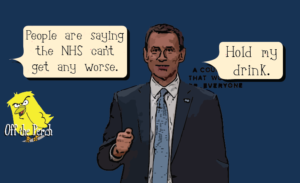 Jeremy Hunt is the UK’s longest serving health secretary. And by sheer coincidence, he’s also presided over one of the health service’s longest ever periods of decline.

But is it just a coincidence?

Off The Perch (OTP) caught up with him to find out more.

OTP: Jeremy, you’ve admitted yourself that NHS performance is “completely unacceptable”. So what do you intend to do about that?

JH: Well, obviously I need to make it worse somehow, but I’m running out of ideas if I’m honest.

OTP: Sorry, did you just say worse? As in not better?

JH: I did! Yes! Wow! You won’t believe how good it feels to finally admit that!

OTP: This is unbelievable. So you’re saying that you’re intentionally running the NHS into the ground like a eighth-hand Peugeot 306?

JH: Well duh! Did you not notice? I’m the first to admit that I’ve got all the mental excitability of a congealed vat of high school gravy, but even I’m not stupid enough to have done this badly accidentally.