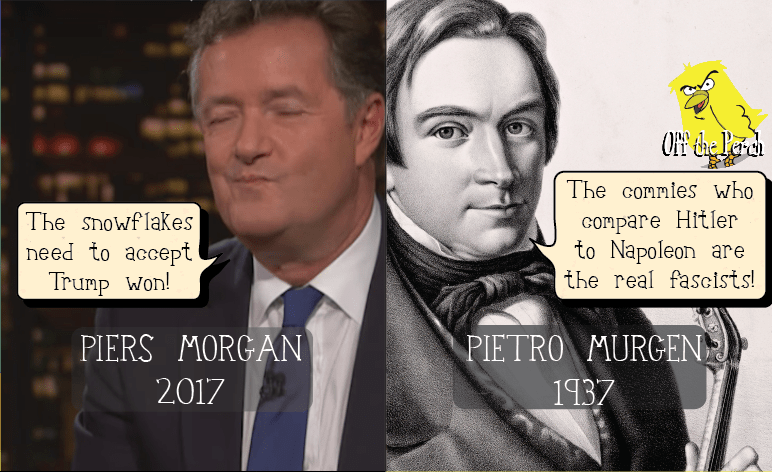 When Piers Morgan left the UK, he was a disgraced and washed-up ex-hack whose reputation was in tatters. Tatters which had been shredded and mixed with pigswill. Pigswill which had been fed to and slopped out of some pigs. Pig slop that was…

… well, I think you get the picture.

Despite being more universally despised than chlamydia, Morgan returned from his US hosting job having achieved the impossible. He’d somehow made himself even more unlikable than before. Primarily by making friends with the man who would come to be known as the ‘Wotsit Hitler’, Donald Trump.

But why do people like Morgan suck up to these sh*t-humps? And how many more of them have existed throughout history?

We flicked through our Encyclopedia of History’s Weaseliest Greasebags to find out.

If you didn’t know, Piers Morgan became friends with Donald Trump when he starred on The Celebrity Apprentice. A similar thing happened with Lao-Ping, who lived in Southern China during the time of Kublai Khan.

Kublai Khan had yet to conquer Southern China at that time. In an attempt to ‘win hearts and minds’, Khan held a sort of mini-Olympics for all the Chinese officials who would come. A competition which was set up to pander to the petty vanities of the corrupt officials he invited.

When Lao-Ping returned, he tried telling everyone what a great guy Khan was. But as Ping had taken the long route home, he struggled to find anyone who would listen. As such, he got back several weeks after The Great Khan had already invaded and burnt his home city to the ground.

He still maintained that The Khan was a top guy though. If only because The Khan had given him two geese for coming second in a rock hurling competition. And also because Ping was an air-headed, vainglorious arsehole.

Igor Stuktzy was a newspaper editor in the time of Vlad the Impaler. Much like Morgan, Stuktzy left the newspaper business in disgrace after he was caught making love to a mule. Which isn’t why Morgan was fired. Although people may have considered him slightly less of an ass if it was.

Stuktzy had taken a liking to Vlad because the ruler once gave him a Ferrero Rocher at an official function. In Stuktzy’s mind, this meant they were best mates, and he went around telling everyone as much.

Of course, opinion waned on Vlad when he started impaling people. Stuktzy thought this most unfair, however, and went round shouting things like:

It could be worse! He could be drowning people in their own wee!

None of you said anything when his father Vlad the Tickler was tickling people*!

The public have spoken, and we have to respect that.

The problem of course is that the thing most of the people were saying was:

A fate which Stuktzy himself was subjected to when Vlad saw him one day, and recognised him as the man who broke into his castle and stole all his Ferrero Rochers.

In the 1930’s there was another newspaper man. This man being the owner of The Daily Mail. Viscount Rothermere was the ancestor of the current owner, and he was a big, big fan of your man, Adolf Hitler. A dictator who went on to be so bad that even now he is likened to annoying people in internet comment sections.

And you know, funnily enough, The Daily Mail is also the paper that Piers Morgan writes for.

Almost as if the paper has consistently involved itself with amoral suck-ups and creeps.

*It should be pointed out that although ‘Vlad the Tickler’ sounds quite light-hearted, he was in fact tickling people to death. Which is horrendous, obviously, but still not as bad as liberating people of their digestive tracts.