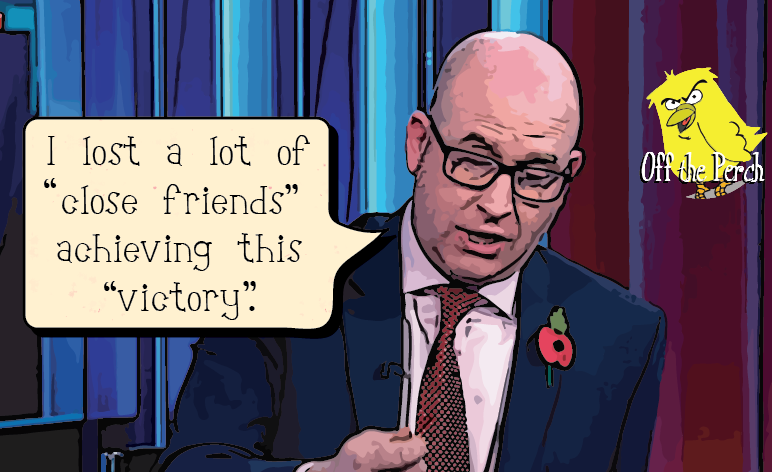 Paul Nuttall’s campaign to become Stoke’s MP has gone somewhat off the rails. The main problem he’s facing being the constant bullsh*t he spouts. Bullsh*t which may have included:

As such, people assumed Nuttall’s chances of winning were slim to non-existent.

And yet anyone who thought that has been proven wrong. Primarily because Nuttall himself has appeared on TV claiming that he’s already won. Despite the vote having not even taken place yet.

The lie of the land

Appearing on Good Morning Britain (despite not having been invited), Nuttall told the nation:

My name is Paul Nuttall, and I am the MP for Stoke-on-Trent! The media is LYING, trying to say that I’m not, but I’ve got a cousin who will swear down now that I am! I’m also thinking about running for Prime Minister! You know what, I just remembered that I already did! And I won! So I’m the Prime Minister, too! And next in line for the throne! And Batman!

Piers Morgan attempted to wrestle Nuttall out of the studio at that point. Morgan was so greasy, however, that the UKIP leader slipped straight through his arms, and Nuttall fled from the studio with his fingers in his ears, shouting:

It’s all true as long as no one tells me otherwise!

Nuttall was later spotted in the Houses of Parliament. Which are of course empty right now, because it’s the break, but footage showed that Nuttall had broken in. It also showed him running between the seats – debating himself – putting on voices and playing make-believe politics.

The police asked the security staff why they didn’t stop him:

Well, we thought we’d just let him have one last go. Because the way things are going, this might be the last chance to pretend he’s a politician that he’ll get.