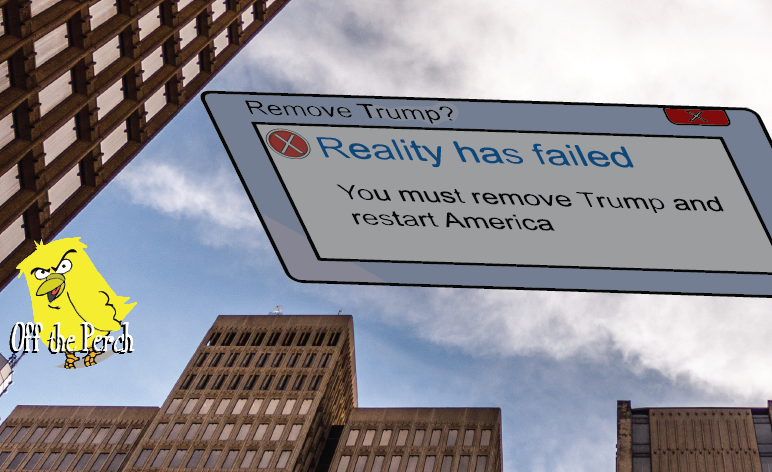 Shortly after Donald Trump completed the press briefing in which he said things like “the leaks are real” but “the news is fake”, a giant error message appeared across the US. An error message which read:

AMERICA HAS CRASHED. DO YOU WANT TO REBOOT?

Trump made several statements which were so outrageous that he managed to crash reality.

It was basically like an accused arsonist turning up to his trial while on fire & then trying to start some smaller fires in the court room https://t.co/893NqYTucB

On Mike Flynn, who he himself forced to resign:

I don’t think he did anything wrong. If anything, he did something right.

On claiming that he had the biggest Electoral College victory since Ronald Reagan. A statement which a journalist told him was – you know – complete and utter b*llocks:

I was given that information; I don’t know.

On the shocking revelation that a nuclear holocaust would be BAD:

And I can tell you one thing about a briefing that we’re allowed to say because anybody that ever read the most basic book can say it: nuclear holocaust would be like no other.

And then it gets worse

On the suggestion that everything leaked about Trump is REAL but the reporting of said REAL leaks is somehow FAKE:

On the frankly startling revelation that Russia was invented by CNN to make Trump look like a disgraced clown; i.e. the sort of clown that other clowns look down their massive, floppy noses at. As if Trump was somehow having a problem making himself look ridiculous:

On the mysterious occurrence of invisible people filling up alleyways as a result of medical care being made available to poor people:

Obamacare, they fill up our alleys with people you wonder how they got there.

In response to an African-American reporter who asked Trump if he planned to work with the Congressional Black Caucus:

Are they friends of yours?

In response to the suggestion that Donald “are they friends of yours” Trump might be racist:

No. 1: I’m the least anti-Semitic person that you’ve ever seen in your entire life. No. 2: Racism — the least racist person.

Shortly after Trump’s speech, the world froze to a halt. After several hours, a giant IT technician appeared in the sky, pulled the back off reality, and began playing around with the insides. She then explained that the system had become back-logged with a giant cache of alt-facts, bullsh*t, Trumpisms, prejudice, and Fox ‘news’.

Unfortunately, the colossal toll taken on the system meant that reality will require a complete system wipe. And there’s no chance of one of them until 2020. Unless of course the trojan virus known as Donald Trump can be uninstalled before then.