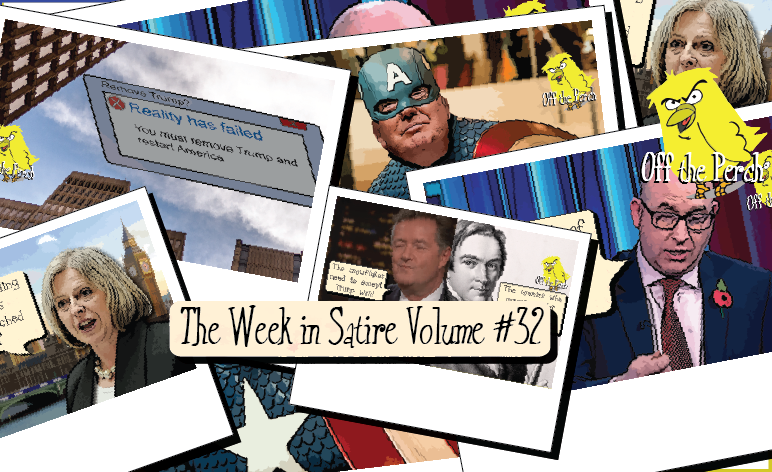 Or so he claims anyway. 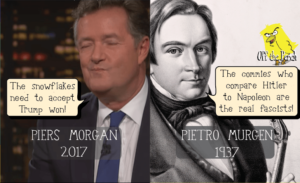 When Piers Morgan left the UK, he was a disgraced and washed-up ex-hack whose reputation was in tatters. Tatters which had been shredded and mixed with pigswill. Pigswill which had been fed to and slopped out of some pigs. Pig slop that was…

… well, I think you get the picture.

Despite being more universally despised than chlamydia, Morgan returned from his US hosting job having achieved the impossible. He’d somehow made himself even more unlikable than before. Primarily by making friends with the man who would come to be known as the ‘Wotsit Hitler’, Donald Trump.

But why do people like Morgan suck up to these sh*t-humps? And how many more of them have existed throughout history?

We flicked through our Encyclopedia of History’s Weaseliest Greasebags to find out. 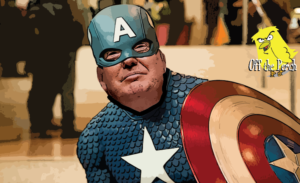 Donald Trump was recently discussing tactical US operations at his Mar-a-Lago restaurant.

In the middle of the discussion, a drunk hotel guest stumbled over and said:

And Trump responded without a hint of irony:

We’re going to send in The Avengers.

When the mirth had subsided, Trump asked everyone what they were laughing about. Following several seconds of nervous gulping, the head of the CIA explained that The Avengers were in fact imaginary. Trump shrugged his shoulders and said:

So they’re alt-real. I can work with that. Most of my businesses have been alt-real! 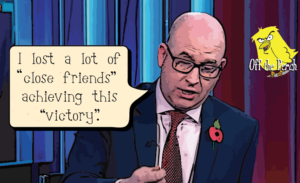 Paul Nuttall’s campaign to become Stoke’s MP has gone somewhat off the rails. The main problem he’s facing being the constant bullsh*t he spouts. Bullsh*t which may have included:

As such, people assumed Nuttall’s chances of winning were slim to non-existent.

And yet anyone who thought that has been proven wrong. Primarily because Nuttall himself has appeared on TV claiming that he’s already won. Despite the vote having not even taken place yet.

The lie of the land

Appearing on Good Morning Britain (despite not having been invited), Nuttall told the nation:

My name is Paul Nuttall, and I am the MP for Stoke-on-Trent! The media is LYING, trying to say that I’m not, but I’ve got a cousin who will swear down now that I am! I’m also thinking about running for Prime Minister! You know what, I just remembered that I already did! And I won! So I’m the Prime Minister, too! And next in line for the throne! And Batman! 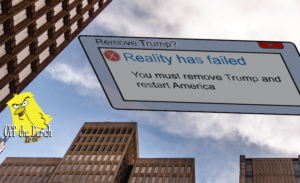 Shortly after Donald Trump completed the press briefing in which he said things like “the leaks are real” but “the news is fake”, a giant error message appeared across the US. An error message which read:

AMERICA HAS CRASHED. DO YOU WANT TO REBOOT?

Trump made several statements which were so outrageous that he managed to crash reality.

On Mike Flynn, who he himself forced to resign:

I don’t think he did anything wrong. If anything, he did something right.

On claiming that he had the biggest Electoral College victory since Ronald Reagan. A statement which a journalist told him was – you know – complete and utter b*llocks:

I was given that information; I don’t know.

On the shocking revelation that a nuclear holocaust would be BAD:

And I can tell you one thing about a briefing that we’re allowed to say because anybody that ever read the most basic book can say it: nuclear holocaust would be like no other. 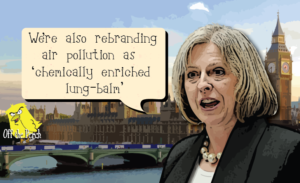 The Conservative government has faced several pressing issues over the past decade. And more often than not, it’s solved them. Primarily by revising the manner in which the problem is measured. For instance, by changing the definition of ‘child poverty’ from ‘any child who is in poverty’ to ‘only children who are so poor that they’re going to spend the rest of their lives paying off the cataclysmic debt that they’ve somehow managed to amass’.

And in light of those successes, the government is looking to rebrand homeless people. Rebrand them as ‘free-range aspiration seekers’.

To get the lowdown on this fresh idea, we spoke to the government’s Secretary for Cynical Problem Avoiding:

What we realised from our research was that ‘homeless’ is a really undesirable word. In fact, a survey we carried out showed that people consider the word to be ‘negative’, ‘unenviable’, and ‘sad-face’. And we reasoned that if people think ‘homelessness’ is unappealing, then obviously that must be an issue with the branding. So we’re doing what any normal human being would do. We’re rebranding the homeless.