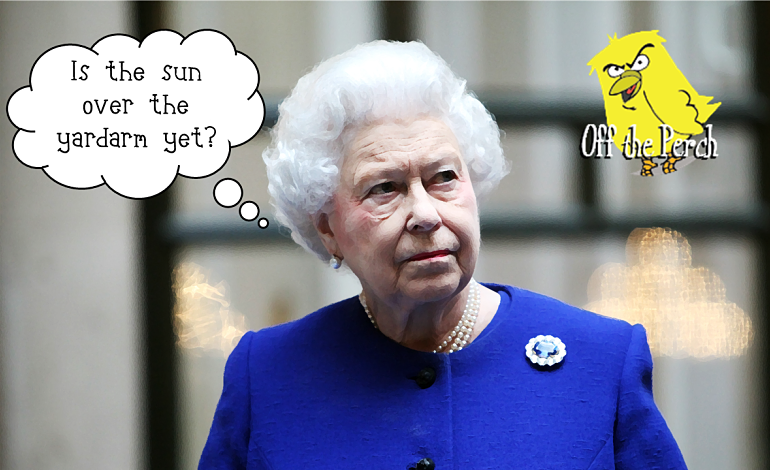 You can’t open your email these days without several messages jumping out, all promising to help you live forever. Celebrity tips, the latest fad diet, new ways of making smoothies, how to do breakfast like Gwyneth Paltrow.

It’s all rubbish, obviously. But lucrative rubbish. A handy earner on the side for various fading celebs and reality TV ‘stars’. And one of Britain’s oldest famous people, the Queen, is nothing if not up for a business venture. What with nearly everyone saying it would be silly for her to get hardship payments to heat Buckingham Palace, Liz has got to find the money somewhere. It would take too long to look down the back of her hundreds of sofas, so she needs to get entrepreneurial.

Charles has led the way by showing it’s possible to monetise his passion for biscuits which taste like eating a medieval barn. So now, his mum’s getting in on the food action.

The Queen has unveiled details of her day-to-day eating habits. In due course, she’ll be expanding this into a TV series, a book range, and obviously a viral blog, which she’ll pretend is written by one of the corgis.

Nutritionists, as well as qualified people, have observed that the Queen is using very traditional anti-aging remedies. Namely pickling and curing. A regular pre-lunch (pre-lunch!) gin and a nightly champagne (doubtless to celebrate being Queen) mean that she is now composed predominantly of alcohol. This has many natural preservative benefits, as well as possibly explaining her relentless perma-smile.

Although it goes unmentioned in the dining details, there’s a rumour that the Queen doesn’t mind a crafty fag when no one’s looking. When she came to the throne in the early 50s, cigarettes were very healthy, and doctors prescribed them to treat a variety of complaints. Clearly ‘smoked monarch’ has an extended shelf life.

With these simple life hacks, Liz is well on course to achieve her goal. Living for long enough that George can take straight over. Or George’s offspring. Who knows? Just waiting for a good one.