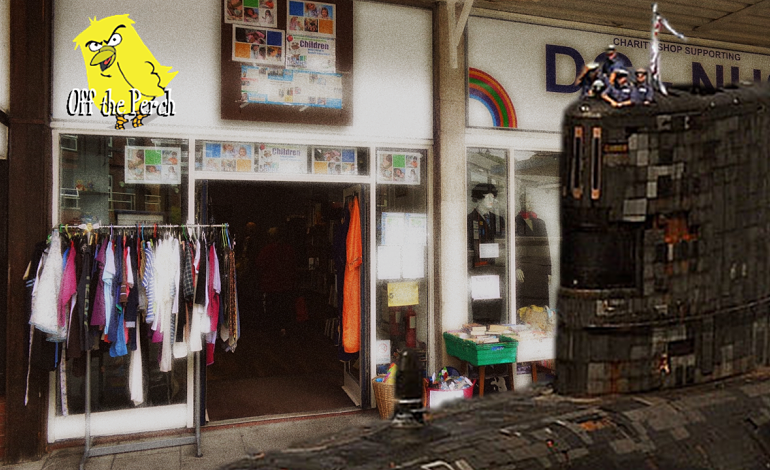 Following the discovery in a Welsh charity shop of plans for a nuclear submarine, an actual complete working vessel has turned up at another similar store. Staff arrived to open up and discovered the 280ft sub on the pavement outside. Along with a bin bag full of clothes, and cardboard boxes containing 14 years of The Radio Times. Manager Glenda Sherry said:

We expect it was a well-meaning member of the public, or possibly the First Sea Lord. It’s probably one of the strangest things we’ve ever had donated.

Some people have pointed out the possible security risk of having things like nuclear submarines freely available on the high street. But others are taking the opportunity to turn the heat on the government.

Until now the Tories have been adamant that we must invest billions in new Trident submarines. But when you can buy a decent second hand one in a charity shop, we should ask questions about value for money. In any case, every other public service runs on a combination of spending way less than is realistic and hoping volunteers will fill in the gaps. Sourcing our military equipment from charity shops looks like Cameron’s Big Society finally happening.

Mrs Sherry said she isn’t quite sure what price to put on the unusual item, which would have cost around £200m when it was new. She’ll probably accept any reasonable offer. And with it weighing nearly 5,000 tons, she’s decided to leave it where it is for the time being.

We’ve just had a voicemail from Mrs Sherry:

The submarine has sold. A young man with Edwardian facial hair and large glasses gave us £500 and said he wanted to convert it into a pop-up theme bar. I don’t even know what that means!

Here’s hoping the hipster doesn’t fiddle with anything and cause a radiological incident to engulf Shoreditch.