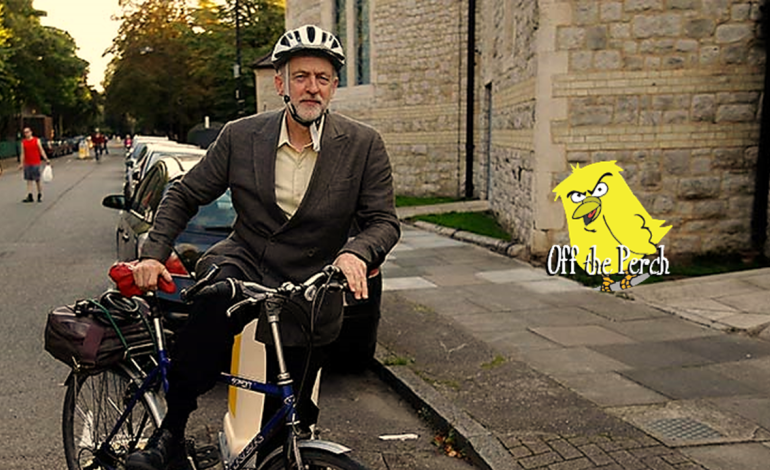 A storm of protest has erupted following the revelation that Labour leader Jeremy Corbyn received payment for a speech to a north London branch of the Campaign for Nuclear Disarmament (CND). Although Corbyn hasn’t broken any rules, critics say this goes against the frugal, monkish persona he likes to cultivate. They’ve accused him of “a breach of trust” and say that such behaviour will only reinforce the public belief that politicians “are all on the gravy train”.

One former cabinet minister, who spoke to Off The Perch on condition of anonymity, said:

Corbyn’s got a racket going on here. He’s blatantly using his public role, and the marketability that it gives him, to feather his own nest. He stands up in the Commons, spouts a bunch of stuff about scrapping Trident, and then cleans up on the CND circuit. It’s preposterous. He should concentrate on leading the Opposition.

He ought to follow the example of others. Take our worthy former Chancellor for example. Mr Osborne regularly finds time to sit on the back benches, despite his external duties. In many ways, he’s doing at least as much for the economy now as when he was in Number 11.

Off The Perch has heard that Corbyn’s relevant entry in the Register of Members’ Interests reads:

Notes: £5 given “for travel” even though I cycled there. They were also kind enough to provide a cup of lemon squash, which I’ve valued at 50 pence.

A member of Corbyn’s close circle told us that he’s always over-declaring and under-claiming. She said that everyone who knows him well thinks it’s hilarious that the press tries to attack him on his personal finances. “He makes Gandhi look like George Osborne”, she said.