'I thought you were coming up with the plan!' screams every Tory at once 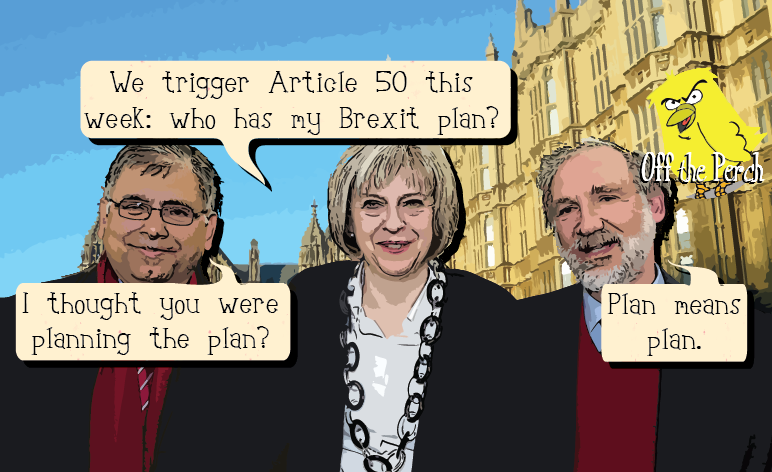 We are now mere hours away from the government triggering Article 50. Which is one of the reasons why the Tory party is turning on itself like a rabid dog barking at its own arsehole. Primarily because the party still hasn’t come up with a plan. Secondly because they haven’t even planned whose job it was to plan-out a plan. And thirdly because the only thing they hate more than everyone else is each other.

We spoke to Professor Karen Whoopsie about the matter. Whoopsie being the leading expert on history’s greatest f*ck-ups:

And this is why they’re giving interviews saying that it’ll be fine if we crash out with no deal. It’s like designing a car and not implementing any safety measures because you reason that the driver could choose to just survive the crash. As if success/failure was all in the mind. Which is hippy bong-philosophy of the highest order.

And so now the government is in a Mexican stand-off with itself. Only instead of pointing their guns at each other, they’re pointing them at the public. A public they’ve told will have all their problems solved with this magical silver bullet called Brexit. Only shooting us won’t solve anything. But one of them is going to have to pull the trigger anyway. And then stand their feigning surprise when they ‘surprisingly’ blow our brains out.

If it wasn’t so staggeringly crap, it would be impressive.

And so it looks like we’re going to be enforcing Brexit on ourselves with no real plan/clue/hope. But it’s also looking like Scotland might be seeking independence. So maybe all of the Scots who feel attached to this Tory kamikaze mission can swap places with the English people who’d rather not spend the next decade shaking their heads in disbelief?