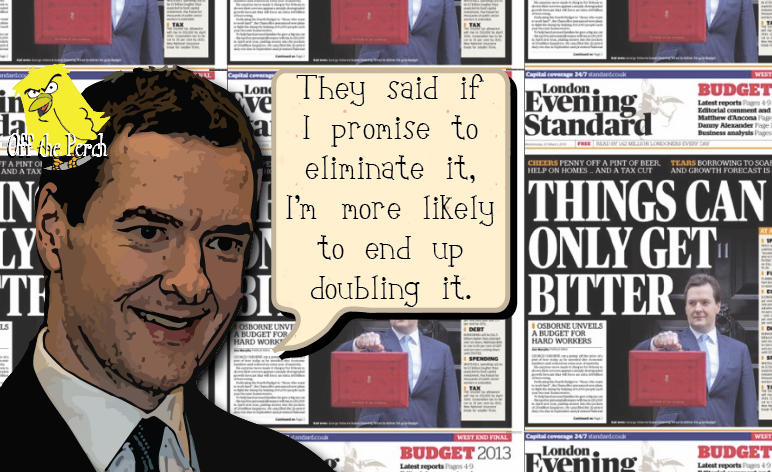 In case you missed it, George Osborne has been made the editor of The London Evening Standard.

Presumably for his tireless services to truth and accuracy.

Which seems like a perfectly logical reward, right? Much like when I was made the senior manager of the RSPB because I ran over some birds.

If you feel like you’re losing your grip on reality, don’t worry – you are. Primarily because reality is getting away from us faster than we can manage to cling on.

I phrased that first tweet badly. It's not a revolving door. He's still an MP. They've put everything in the same fucking room.

But what does Osborne himself have to say?

Off The Perch caught up with him at what we’ve been explicitly told not to describe as a ‘drug sauna’:

It’s a great new challenge for me! I’ve promised to eliminate the readership within five years. Which sounds crackers, but when I promised to do the same thing to the deficit, I ended up trebling it!

Although actually, was it trebled or doubled in the end? I’m not very good with numbers, unfortunately. Or facts. Or ethics.

Which is precisely why I’m so excited to have been rewarded like this! Because ethically, I have no problem with it!

Common sense, where the f*ck art thou?

So we now have a serving member of the governing party editing a newspaper.

Which is – to be fair – only troubling IF YOU ACTUALLY CONSIDER THE IMPLICATIONS.

But not to worry, because The London Evening Standard will soon be catering to those of us who don’t want to consider things.