Selling missiles is totally Christian if you write ‘Easter’ on them, says PM 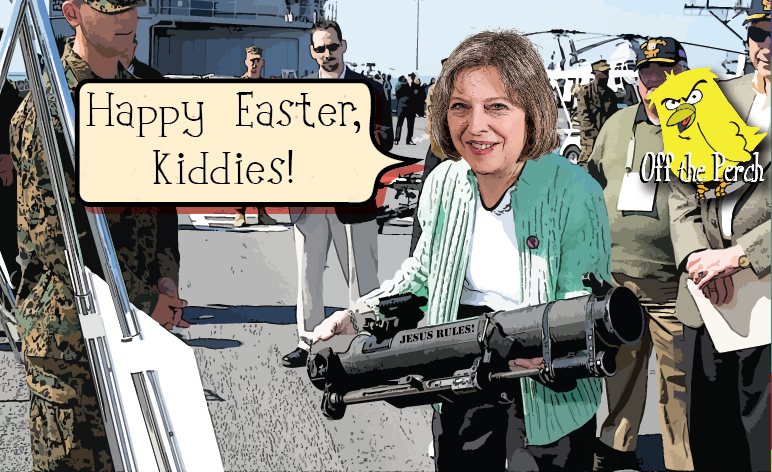 Theresa May has used her visit to Saudi Arabia to criticise one of the greatest injustices in the world. Namely that Cadbury has stopped using the word ‘Easter’ on its products. Which isn’t entirely true, but the fact that The Telegraph is saying otherwise is at least 100% genuine.

Off The Perch (OTP) managed to catch up with the PM before her big sales pitch to the Saudis:

OTP: You certainly seem to have very strong Christian beliefs. How do you square them with selling arms to Saudi Arabia while it wages a universally condemned war against Yemen?

PM: Missiles are 100% Christian if you write Easter on them. That’s why we’re happy to announce our latest missile – the EASTER BASTARD 9000.

OTP: Err… okay..? But didn’t the Bible also say “thou shalt not kill”?

PM: Well, yes. But that doesn’t mean you can’t make a killing from selling arms to people who do.

OTP: I think it probably does mean that, actually. But moving forwards, do you think more corporations should have stronger Christian values? Do you think capitalism needs to be more virtuous?

PM: Eww, no. They just need to use religious iconography and branding to sell more products. That’s why I keep telling them to sell a special edition ‘Cruci-Twix’ too. Just like Jimbob would have wanted.

PM: You can’t expect me to remember the name of every Mark, Luke, and Harry in the Bibble! Now stand still so I can throw the first stone at you!

Although some people are claiming that weapons aren’t very Christian, it’s come to light that missiles are mentioned in the Bible exactly as many times as chocolate eggs.

And you can probably guess how many times that is.