‘Brexit’ to be given religious status - Canary 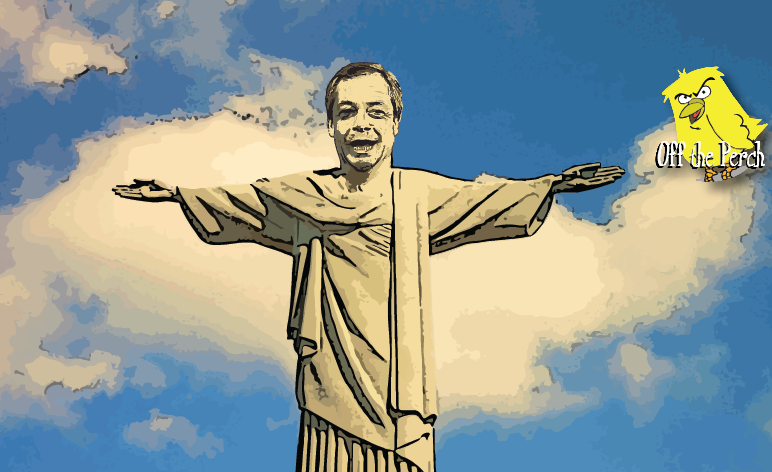 The reasons for going ahead with Brexit are vanishing faster than Nigel Farage’s post-referendum moustache. And as such, the dedicated people who thought they were voting for a better NHS, reduced immigration, and having our cake and eating it are having to reframe the issue in their minds. They’re having to take something they thought was a rational choice and turn it into something they believe in.

Just like you might believe in Jesus Christ, the Mighty Ducks, or a half-baked soufflé. Although obviously only one of those three has ever actually delivered.

The benefits of Brexit becoming a religion are obvious. For a start, the Brexians will be able to have people trialled for blasphemy. And several of them are already floating possible punishments:

There’s also the issue of religions being given tax exemption status. Leading many to speculate that this whole thing may be a scam on top of a scam. Especially as the prominent Brexiteer and Wetherspoons founder has offered his pubs as churches of Brexit.

Although some say Wetherspoons pubs were already fulfilling that role anyway.

Not to be outdone, several prominent Remainers have set up their own church. Their ‘logic’ is that the referendum was lost because of the ‘weak faith’ of many Remainers. Primarily because people who voted Remain did so grudgingly, and also:

To banish this sinful weakness, Pope Alistair Campbell is making his Church of Latter Day Remainists march through London while self-flagellating themselves with copies of The New European.

There are also those who are agnostic about the whole affair. People who dislike the EU but think that leaving right now will see us becoming (more of) an ultra-right-wing sh*thole. And also people who think that, although Brexit may be bad in the short term, it could ultimately lead to a fairer future.

And to those people, we say WE WILL FIND YOU, AND WE WILL MAKE YOU SUFFER FOR YOUR LACK OF FAITH!