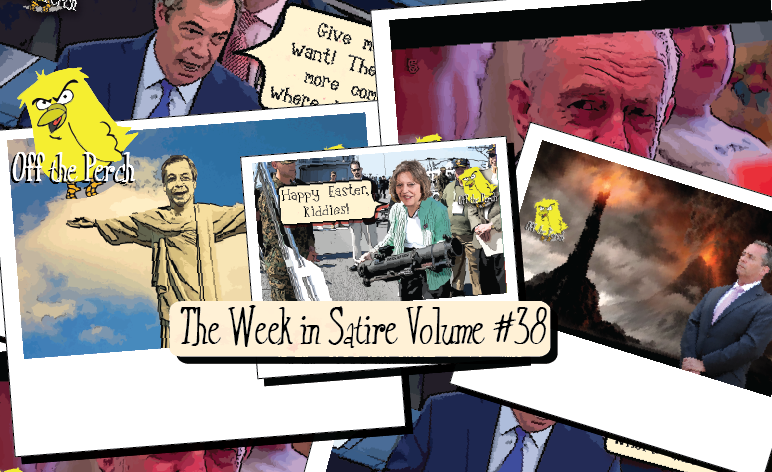 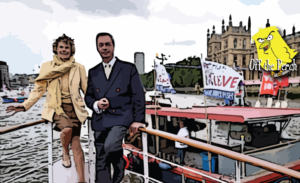 Farage donates his flotilla to the invasion of Spain

On 2 April, former leader of the Conservative Party Michael Howard hinted we could go to war with Spain. And although he said many things that implied that we definitely could, he also explicitly said that we shouldn’t.

Which would have been quite clever, if people didn’t already understand concepts like ‘subtext’, ‘reading between the lines’, and ‘calling a spade an    idiot’. 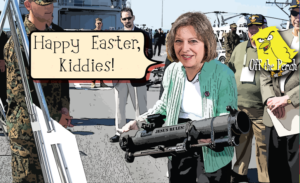 Selling missiles is totally Christian if you write ‘Easter’ on them, says PM

Theresa May has used her visit to Saudi Arabia to criticise one of the greatest injustices in the world. Namely that Cadbury has stopped using the word ‘Easter’ on its products. Which isn’t entirely true, but the fact that The Telegraph is saying otherwise is at least 100% genuine.

Off The Perch (OTP) managed to catch up with the PM before her big sales pitch to the Saudis:

OTP: You certainly seem to have very strong Christian beliefs. How do you square them with selling arms to Saudi Arabia while it wages a universally condemned war against Yemen?

PM: Missiles are 100% Christian if you write Easter on them. That’s why we’re happy to announce our latest missile – the EASTER BASTARD 9000.

OTP: Err… okay..? But didn’t the Bible also say “thou shalt not kill”?

PM: Well, yes. But that doesn’t mean you can’t make a killing from selling arms to people who do.

OTP: I think it probably does mean that, actually. 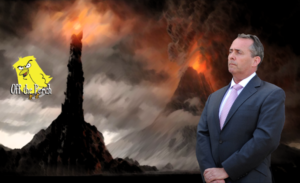 Liam Fox to push for trading ties with Mordor

The UK’s Secretary of State for International Trade, Liam Fox, is leaving no stone unturned in his quest to find post-Brexit trading partners for Britain. And he’ll find no shortage of stones in the boulder-strewn wastelands of Mordor.

The government’s big guns have set off around the world to drum up sales for, er, big guns. Theresa May has been on a mission to show Saudi women that they can aspire to be war-mongering despots just like the men. While Fox, a kind of visual aid to prove that meritocracy isn’t a real thing, has headed for the Philippines.

The Philippines is currently run by Rodrigo Duterte, a jumped-up mayor who thinks the law is for weeds. Fox has at least solved the mystery of what constitutes ‘British Values’ because apparently we share them with the Philippines. So expect extra-judicial executions, possibly by flinging from helicopter, to sweep Britain soon. Once we can shake off those hand-wringers in Brussels with their Health & Safety red tape, of course. 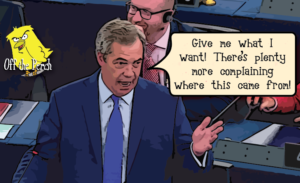 Nigel Farage has accused EU leaders of behaving like “the mafia”. And as a follow-up, he has made them an offer they can’t refuse. Which is either they give us exactly what we want, or we will not be happy!

And if they thought the UK’s complaining was bad before, just wait until they don’t even have to listen to us anymore because we disinvited ourselves from their club!

People tried to explain to Farage that it isn’t the case that Britain is being given a bad deal because it’s leaving the EU. It’s actually that we were only getting a good deal in the first place because we were part of the union. 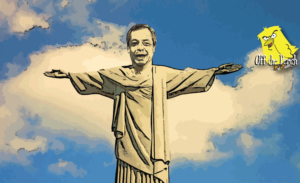 ‘Brexit’ to be given religious status

The reasons for going ahead with Brexit are vanishing faster than Nigel Farage’s post-referendum moustache. And as such, the dedicated people who thought they were voting for a better NHS, reduced immigration, and having our cake and eating it are having to reframe the issue in their minds. They’re having to take something they thought was a rational choice and turn it into something they believe in.

Just like you might believe in Jesus Christ, the Mighty Ducks, or a half-baked soufflé. Although obviously only one of those three has ever actually delivered.

The benefits of Brexit becoming a religion are obvious. For a start, the Brexians will be able to have people trialled for blasphemy. And several of them are already floating possible punishments: 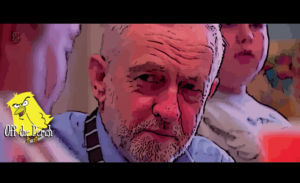 REVEALED! Corbyn’s evil scheme to raise school kids on a diet of socialism!

EDITORIAL NOTE: We think this article was originally intended for a tabloid newspaper, but was somehow forwarded to us. Thankfully the tone of their reporting is almost identical to our satire, so we were still able to use it.

On Thursday 6 April Jeremy Corbyn revealed an EVIL PLOT to fund FREE SCHOOL DINNERS by making the super-rich pay their fair share. We can now sensationally reveal that the HAPLESS COMMIE will be dishing out something far more sinister than free fish fingers.

And that something is SOCIALIST IDEOLOGY!