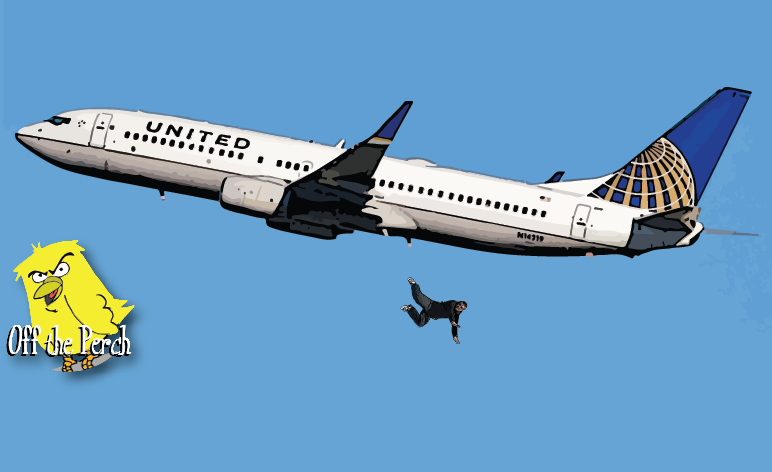 United Airlines were criticised this week for beating up an elderly doctor. Yet somehow, the situation has plummeted even further since then.

And quite literally so in the case of one of their passengers.

One passenger claims the incident took place when the complimentary peanuts were being handed out, and the cabin crew ran out before being able to offer everyone a packet.

Although the passenger who got left out didn’t even want peanuts, the air attendants started shouting:

It’s not about you, chump-knuckle

How’s it going to look on our next development review if our peanut distribution dips below 100%?

In an effort to keep their legume-delivery statistics high, the crew did what any United Airlines crew would. They opened the door and forcibly ejected the defiant passenger out of the plane.

United Airlines have of course released a statement in response:

Look, no one was more irritated by this situation than us. Do you think we want to be answering questions about why we’re throwing passengers off planes? Do you realise how bad that makes us look?

The fact of the matter is that United Airlines have maintained a peanut success rate of 100% for years. But we mess up once, and suddenly we’re the bad guys!

Readers will be glad to know that the ejected passenger did actually survive. And he’s suing United Airlines for peanuts. Actual peanuts too. Because obviously that’s all they’re going to have left following the PR nightmare they’re about to experience.