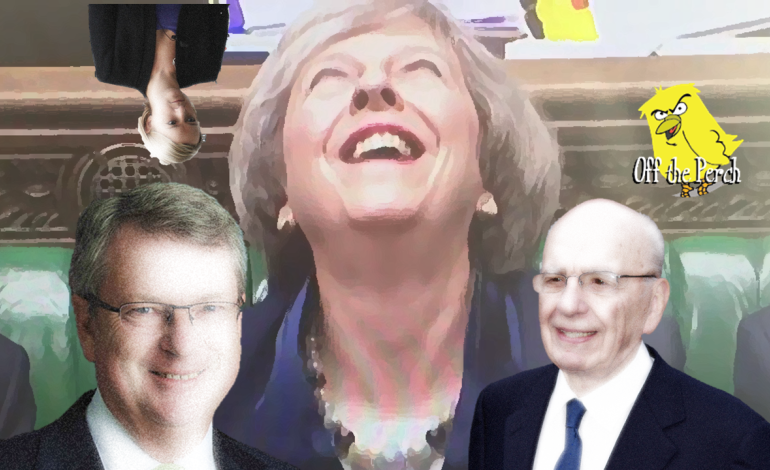 In a move some are calling the “logical conclusion” of modern-day Conservatism, the Tories have privatised their entire election campaign.

And in a nod to the post-Brexit ‘Global Vision’, most of the work will be done by Australians. Namely Lynton ‘Dead Cat Play’ Crosby and the irritatingly immortal Digger himself, Rupert Murdoch.

A source close to the campaign spilled the beans to Off The Perch:

Frankly, the idea of election campaigning being the preserve of elected representatives, paid from the public purse, makes me sick. It’s a throwback to the bad old days of big government. I’m sure there are some nostalgia-addled folk who think that Jeremy Corbyn addressing 10,000 people from the top of a fire engine is more ‘authentic’ than a smear campaign in the tabloids. But we don’t. Our expert team of muck rakers and shit stirrers is the best that money can buy. And by the way, we’re being really careful with the accounts this time round. No, no reason. Just thought I’d mention it.

So far, the ploy has been effective enough to confuse the BBC’s sleep-deprived energy drink test subject, Laura K. She actually thought May was strategically lying low, when in fact we know it’s because the PM’s electioneering role has been outsourced to the private sector. So she’s kind of redundant. Have some respect, Laura!

Some people have suggested that the BBC may actually be trying to help the Conservative campaign. Not on a commercial basis, obviously, but possibly because it thinks the ‘Big Society’ is still happening. This would surely never happen, of course, what with the BBC being so impartial.

We’ve been unable to verify a rumour that the office of Gordon Brown is proposing the whole election be funded via a public-private partnership. This would mean it costing nothing at all apart from repayments of £600bn over the next 30 years.