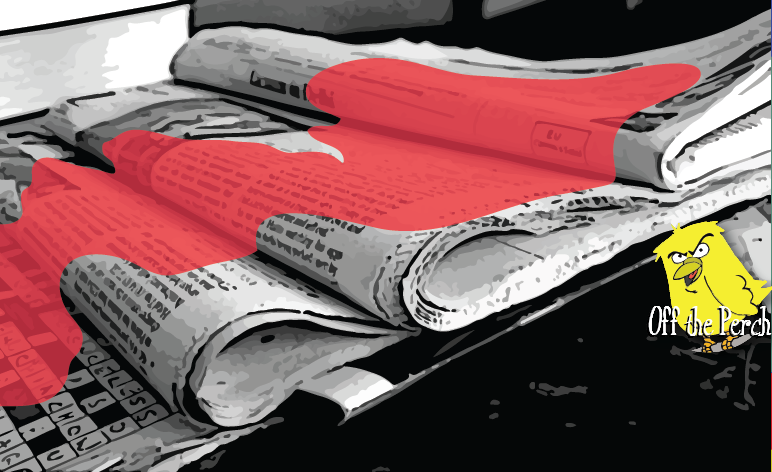 The UK’s resident sleaze king Kelvin MacKenzie made the news today. Firstly, after he suggested that an ironic fate for Jeremy Corbyn would be if an asylum seeker stabbed him to death. A suggestion in such poor taste that even he distanced himself from it.

But that’s not why he made the front pages.

Because Mackenzie was in for a little irony of his own.

Bleed all about it

MacKenzie was doing what he does best. Which is basically just walking about – looking smug – and carrying on as if he was the human equivalent of an open-air sewer.

An open-air sewer in the middle of a diarrhoea epidemic.

A diarrhoea epidemic on the hottest day of the year in the warmest year of the century.

During the course of his bastard-trek, the sultan of scum happened to walk past the warehouse where they print The Sun. A publication that MacKenzie used to edit. A publication that’s a little bit like a newspaper would be if it was written by comparatively intelligent rats.

MacKenzie thought back to the days when his old boss Rupert Murdoch crushed the printers’ union. And then he went into the building to lord-it-up over the plebs he despises.

Unfortunately for MacKenzie, he didn’t pay attention to where he was gloating. And as a result of the slime that he constantly oozes, the poor fellow ended up slipping and falling into a printing press.

Thankfully, the people who read The Sun weren’t perturbed by the fact that today’s front cover was literally just a hot-mess of human tripe. Because that’s what the cover was yesterday as well.

And the day before that too.

And the day before that.

The picture being that The Sun is fetid, intestinal word-garbage. And the lumpiest chunk of human refuse in it is Kelvin Calder MacKenzie.