The election in satire week #2 - Canary 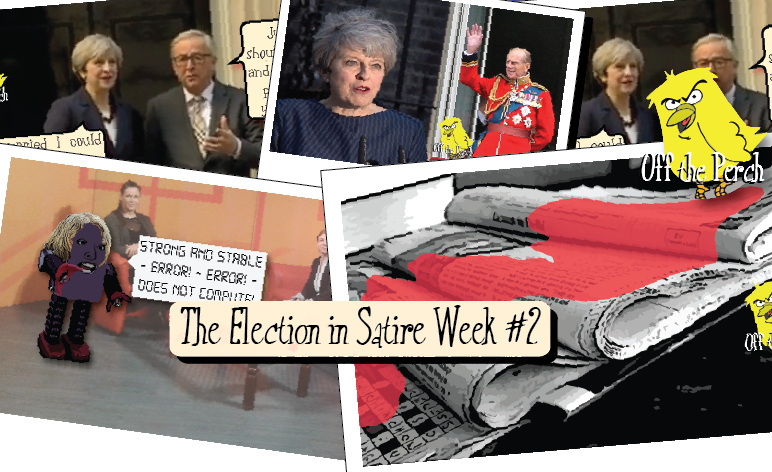 A week in which Kim Jong-May alerted us to a sinister to EU plot to carry on reporting how clueless she is! A week in which Jeremy Hunt claimed the biggest threat to the NHS is actually something other than him! And a week in which UKIP lost more councillors than their leader Paul Nuttall could count – despite one of his many PhDs being in advanced mathematics! 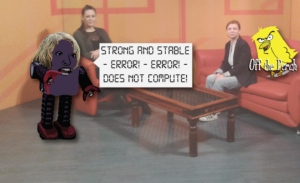 Theresa May is one of the most advanced robots in the world. Not only is she capable of repeating over three different slogans, she can also stand in place and scowl for five minutes at a time.

Although this failed to compute today, as an interview with the robot went fantastically faulty.

Tory scientists adapted the May-Bot from a Stable-O-Matic 5000. It’s unable to meet regular members of the public, however, as it’s prone to picking up wireless signals from people’s phones. Which is why the May-Bot once streamed Simon Mayo’s Drivetime when she was supposed to be giving a speech about trade tariffs.

Unfortunately, these wireless issues have once more come into play, as a live studio ended up scrambling the robot’s micro-BS circuits.

This led to the PM weirdly responding to a question about her leadership: 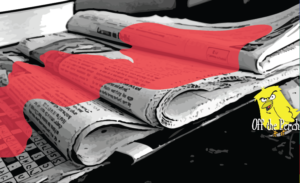 The UK’s resident sleaze king Kelvin MacKenzie made the news today. Firstly, after he suggested that an ironic fate for Jeremy Corbyn would be if an asylum seeker stabbed him to death. A suggestion in such poor taste that even he distanced himself from it.

But that’s not why he made the front pages.

Because Mackenzie was in for a little irony of his own.

Bleed all about it

MacKenzie was doing what he does best. Which is basically just walking about – looking smug – and carrying on as if he was the human equivalent of an open-air sewer.

An open-air sewer in the middle of a diarrhoea epidemic.

A diarrhoea epidemic on the hottest day of the year in the warmest year of the century. 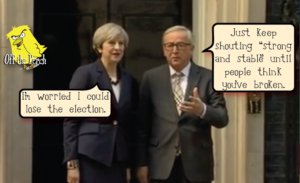 Theresa May held a press conference yesterday to accuse the EU of ruining her election chances. After May had finished her finger-wagging, one of the journalists raised a hand and asked:

How’s that then? Has the EU been running your woeful election campaign?

To which a manic-eyed May replied:

From EU to her

According to a Downing Street insider, May asked the EU for advice on how to win the election. The advice given to her included: 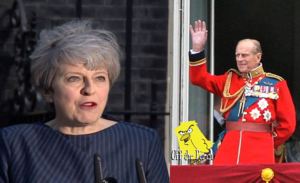 The government has moved to a ‘war footing’ following the revelation that Prince Philip is still alive. Sleepy Whitehall officials were heard muttering: “This is all we fucking need” as the news began to emerge in the small hours.

A source within David Davis’ Brexit department told Off The Perch:

This really has come as a terrible blow. My colleagues are already at their wits’ end trying to sweep up after our Secretary of State. And the PM is hardly helping. Now it looks like the Duke of Edinburgh is still with us, we’re likely to have to do even more fire-fighting. To be honest I’m not even sure if getting him to retire is a good thing or a bad thing. Without all those plaques to unveil, he might have more time for casual racism and accidental international incidents.