Tories to bring back fox hunting, workhouses, and Jimmy Savile - The Canary 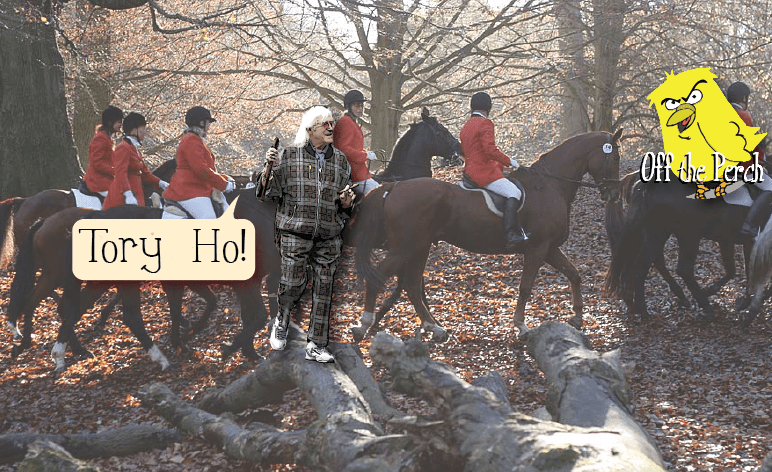 Fox hunting is about as popular in Britain as war films in which Americans take credit for things they didn’t do.

Less popular than that, in fact.

So about as popular as a non-factual submarine epic in which all the characters are played by the Crazy Frog.

And yet, despite that, Theresa May is planning to give MPs a free vote on the matter.

Because she’s so confident of victory that she can do something no Tory has done in a long time:

Seeing May hint at going Full Tory is a terrifying sight indeed. Like walking into a room and finding a giant snakeskin – knowing that something larger and more hideous has slithered out.

But what other unpopular schemes can we expect to return?

We spoke to Count Dracula, the head of the Conservative thinkthank FullTory4Eva:

Fox hunting is but the beginning! Those glamorous hedge rats hardly have any blood in them anyway. So obviously we’ve got our eyes set on bigger game!

Another thing we’ll be bringing back are workhouses. Do you think it’s coincidental that we stopped child labour, and then a mere century later we have a childhood obesity crisis? Of course not!

We’ll also be bringing back Sir Jimmy of Savile. He may be universally despised, but he was a cracking fundraiser for us!

And guess what, bloodbags? You’ve already decided to vote for us. So now you need to suck it up, and deal with everything we have planned for you. Blerr!

Once the window was opened, the Tory blood-sucker flew into the night and shouted:

I’m going to make you regret opening that window for me!

Which is also the Tories’ plan for everyone who votes for them.