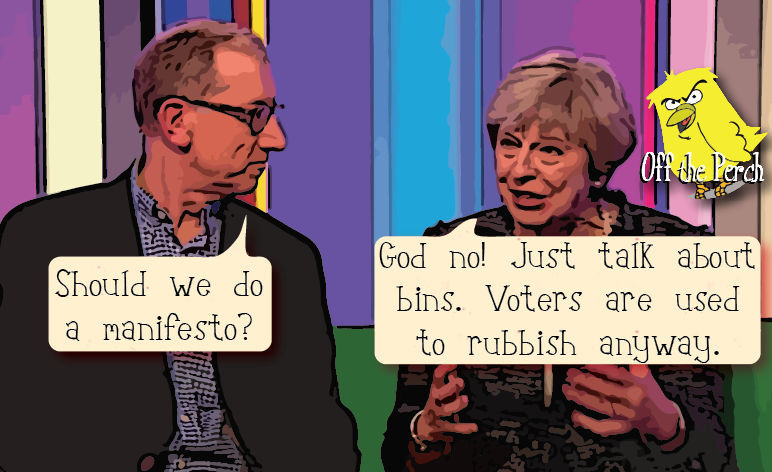 The Tory party hasn’t given the media much to go on in terms of backing them. Which is why they’ve had to fall on their weakest tactic yet when attacking the Labour manifesto:

But who will put the bins out?

If you’re unsure what that means, it relates to Theresa May’s husband saying that he puts the bins out. One of the few solid things that May has given the media in this election cycle.

This led to the following discussion between several tabloid editors:

THE SUN: This Labour manifesto is well not-saucy. How are we gonna stick it to them?

THE TELEGRAPH: It reads like mugwump’s wet dream! Where’s the fox hunting? Where are the cuts to pensions? There shall be tutting in golf clubs across the land!

THE SUN: That’s alright for your crowd, but what am I gonna tell my lot? Some of them like foxes and not being screwed out of retirement money.

THE DAILY MAIL: TELL THEM THE STREETS SHALL RUN RED WITH RIVERS OF BLOOD!

THE TELEGRAPH: Tell them about one of the policies that won’t make their grubby little lives worse? Not that they deserve that. Binge-scroungers the lot of them!

THE SUN: The only policy that won’t screw them is the energy freeze one, and we did a front page saying that was communism when Ed Miliband suggested it.

THE DAILY MAIL: SUPPORT IT ANYWAY! WHO CARES IF PEOPLE SAY YOU’RE A HYPOCRITE?

THE TELEGRAPH: Well there must be something these chip-monkeys like! What about that interview on The One Show?

THE SUN: The one where her husband said he bangs the bins out?

THE TELEGRAPH: Exactly! Did Labour say who will put the bins out in their communist manifesto?

THE TELEGRAPH: Then by Jove, we’ve got them!

And now thankfully, because our media is so fresh, we’ve managed to look past all of Labour’s policies and get to the real issue: