The election in satire Week #3 - The Canary 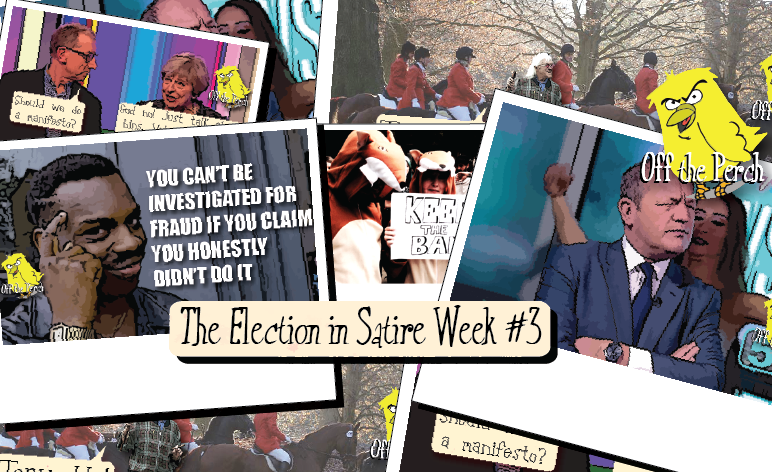 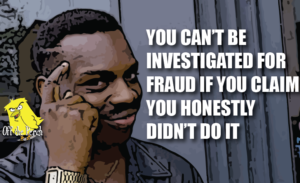 ‘Not fraud, just many mistakes that had the same effect’ say electoral investigators

The Crown Prosecution Service (CPS) has finally returned its verdict on the Conservative election fraud scandal. And that verdict is:

It wasn’t fraud at all. It was just lots and lots (and lots) of mistakes that coincidentally happened to benefit them in exactly the same way that fraud would have done!

We spoke to a fraud expert to find out how this is a thing:

Well, it’s simple isn’t it. No one knew what they were doing. And ignorance is a defence if you’re rich. Did you not know that?

Simon Danczuk – the MP who’s famous for sexting a teenager – has left the Labour Party. And he’s cut his membership card in half.

Why? Because the pompous, non child-sexting communists who run the party do not represent him anymore!

Rochdale is, unfortunately, famous for a child abuse scandal.

Danczuk – the MP for Rochdale – is famous for sexting a teenager who originally contacted him in his capacity as an MP.

If you’d ever worked with vulnerable teens, you’d know that a situation where a person in a position of power forms a relationship with a teenager who contacted them because of that position is known as an: 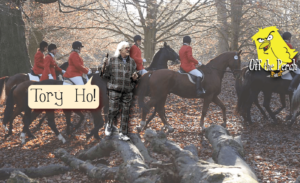 Tories to bring back fox hunting, workhouses, and Jimmy Savile

Fox hunting is about as popular in Britain as war films in which Americans take credit for things they didn’t do.

Less popular than that, in fact.

So about as popular as a non-factual submarine epic in which all the characters are played by the Crazy Frog.

And yet, despite that, Theresa May is planning to give MPs a free vote on the matter.

Because she’s so confident of victory that she can do something no Tory has done in a long time:

Seeing May hint at going Full Tory is a terrifying sight indeed. Like walking into a room and finding a giant snakeskin – knowing that something larger and more hideous has slithered out.

But what other unpopular schemes can we expect to return?

We spoke to Count Dracula, the head of the Conservative thinkthank FullTory4Eva: 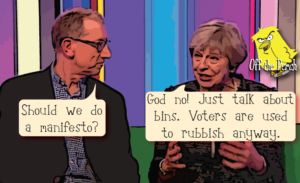 Labour manifesto fails to say who will take the bins out

The Tory party hasn’t given the media much to go on in terms of backing them. Which is why they’ve had to fall on their weakest tactic yet when attacking the Labour manifesto:

But who will put the bins out?

If you’re unsure what that means, it relates to Theresa May’s husband saying that he puts the bins out. One of the few solid things that May has given the media in this election cycle.

This led to the following discussion between several tabloid editors:

THE SUN: This Labour manifesto is well not-saucy. How are we gonna stick it to them?

THE TELEGRAPH: It reads like mugwump’s wet dream! Where’s the fox hunting? Where are the cuts to pensions? There shall be tutting in golf clubs across the land!

THE SUN: That’s alright for your crowd, but what am I gonna tell my lot? Some of them like foxes and not being screwed out of retirement money. 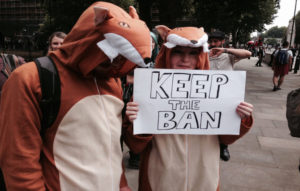 There was elation in Britain’s woodlands today as a national spokesman for foxes spoke out against Conservative plans to bring back fox hunting. Nigel Farage, leader of the Fox Liberation Front and elective MP for Surrey, has cast serious shade on the move. “Hairy, bitter and prone to biting, the Tories are a bigger threat to woodland mammals and Britain at large than us foxes,” he said. With a divisive general election ahead, what could be more fantastic?

Fox in a hen house

Britain banned fox hunting in 2004 (in theory). Hailed as ‘cruel’, the sport is condemned by wildlife groups and angry Twitter warriors alike. During the height of hunting, around 25,000 foxes were killed each year. Astoundingly, 85% of these were later declared ‘fit for work’ by the Department for Work and Pensions. With the possibility of the act being reversed, foxes and humans alike are up in arms. FLF Spokesfox Farage said:

Theresa May is a fox in the henhouse. Fox rights are being repealed, the Fox Rights Act is under fire, and immigrant foxes are scared of being deported. It’s time for Britain to fight back against such abuses.