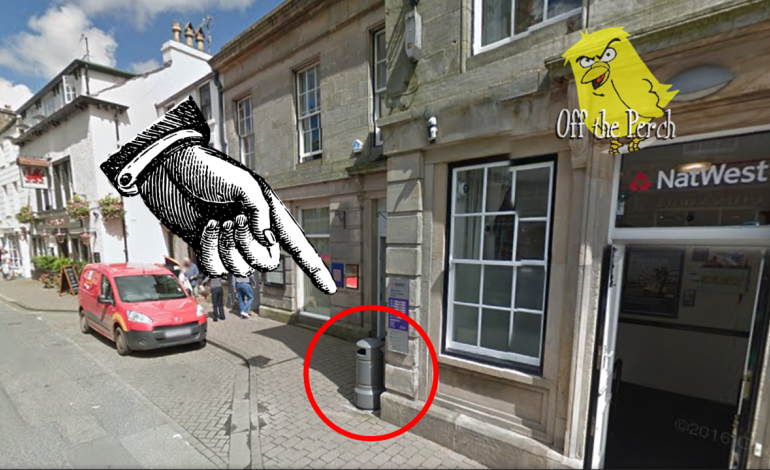 Residents of historic Cumbrian market town Kirkby Lonsdale received a shock on Monday 15 May, when a full draft of the Conservative Party’s election manifesto was found crumpled in a bin. The normally sleepy town now finds itself at the centre of a political scandal.

On closer inspection, Mr Shock realised the scribble was in fact a full draft of Conservative plans for government, if elected on 8 June.

‘It’s left me with some serious questions, if I’m honest,’ continued Mr Shock. ‘Like… what was Theresa May doing in Kirkby Lonsdale? And, well… it just seems a bit crap to me. I couldn’t get my shoppin’ list on the back of a fag packet. And there she is, tryin’ to run the country off the back o’ one.

Off The Perch approached the Conservative Party for comment, but were told to “sod off”. On our second attempt, a spokesperson made themselves available. We asked if the Conservatives were really going into the election with just these four promises.

We believe in promising small and delivering big. We get these four things right, and Britain will be great again.

We asked how any of these promises would make an impact on the economy, jobs, falling wages, rising use of food banks, or the plight of sick and disabled citizens. The spokesperson gave our reporter a stern look and left the room in silence.

Back in Kirky Lonsdale: A town in shock

It is the second time this year that Kirkby Lonsdale has found itself at the centre of political intrigue. In February, Mr Shock found the government’s Brexit strategy on the back of a cigarette packet in the very same bin.

You know, I’m starting to get the impression that the Conservatives haven’t got the faintest clue how to run this country.

I mean, who the hell wants to see the return of compulsory hats?