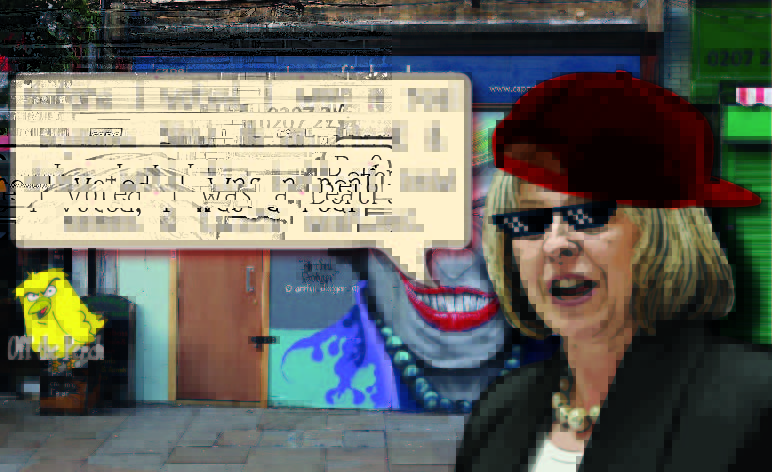 Today is the last day that you can register to vote. The Tories don’t want young people to vote, as young people by and large don’t vote for people who look like they could play the Child Catcher in a David Lynch-directed reboot of Chitty Chitty Bang Bang.

So to discourage young people from signing up, the Tories have decided to deploy a bit of reverse psychology.

The campaign began with Theresa May doing a rap in which she rhymed:

Almost as cool as school,

Non-voters I pity as fools,

Which I believe is some sort of reference.

This was followed up by Michael Gove in shorts doing skateboard stunts. Which is to say Gove in shorts falling off a skateboard. Although he did at least have elbow and knee pads on. Which would have been useful if he hadn’t fallen flat on his face.

Gove was followed by Philip Hammond listing 459 reasons why voting is “on fleek”. Each one read out in his dull monotone. And most of them relating to things that young people don’t really care about – like the Magna Carta and forethought.

The political broadcast rounded out with Boris Johnson playing a megamix-style medley on his one-man-band equipment. Smash hits that included The Twist by Chubby Checker, Popcorn by The Crazy Frog, and Ride of the Valkyries by Wagner.

The Tory drive to discourage voters was met by Jeremy Corbyn literally bringing the noise:

The Renegade Master – Power To The People! #Labour #GE2017 pic.twitter.com/xzBZz333TJ

And if you want to bring some noise of your own, make sure you register to vote today (22 May) before 11:59pm!

– Register to vote in the 8 June general election. 22 May is the final day.