Reward offered for ‘Bojo’ the Clown 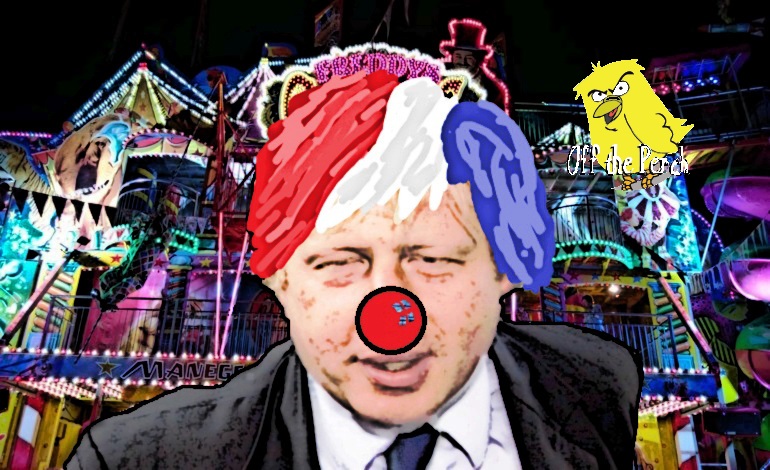 In a shocking turn of events, it seems that Foreign Secretary Boris Johnson is actually infamous children’s entertainer ‘The Fantastic Bojo’. He’s been missing from The Grand Gove’s Travelling Circus for almost a decade. And now, the illustrious circus owner has contacted Off The Perch. He says:

Children came from far and wide to see Bojo’s tricks. He juggled, danced, mumbled hilarious gibberish, and made balloon animals. Along with Tony Blair, the world’s greatest liar, he was our main act. Any information that could bring him back to us would be well rewarded.

Gove first noticed Bojo’s disappearance in late 2007. After a sold out performance in Milton Keynes, the popular clown disappeared. Distraught, Gove and his team began a decade-long search. Little did they know that Bojo was at large, posing as Mayor Of London. Meanwhile, what kept his secret? His gibberish indistinguishable from that of the rest of his party. Linguistics expert Nikolaus Neadsom told Off The Perch:

Seemingly, Boris Johnson’s apparent classically influenced vernacular is easily confused with the moronic gibberish of a drunk grandfather at Christmas. Additionally, his tendency to inflame foreign relations with borderline racist sentiment is further testament to his commitment to this role. Seriously, wake up sheeple.

And even more shocking is Johnson’s promotion to Foreign Secretary. A Downing Street insider told Off The Perch:

We were suspicious when we saw his hair, big red nose, and flamboyant dress sense. Suprisingly, it was only when he started handing out balloons to the UN that the nail stuck. But to be honest, the other option was Nigel Farage.

We saw an example of his high-octane clowning just yesterday:

Your regular painful reminder that this is the man now in charge of Britain's entire global diplomatic operation. pic.twitter.com/nSsK1KbGEd

Scotland Yard is yet to confirm reports that Bojo has been luring small children down a sewer grate and devouring them. But horror author Stephen King tells Off The Perch:

I can confirm with absolute certainty that the politician Boris Johnson is not Pennywise the glamour. However, I have severe concerns about Gary Lineker. He seems a bit too nice.

And regardless of the inappropriate nature of his post, Bojo has continued to amaze. After sensationally descending a zip line during the Olympics, to making £350m pounds a week disappear, it seems that Bojo’s bag of tricks is bottomless. Off The Perch attempted to speak to Bojo, but only received a balloon model of Nigel Farage and a cryptic message:

We called Downing Street, but the Prime Minister was too busy taming her two lions – ‘Strong’ and ‘Stable’ – to comment.

– Visit your local circus and feed the elephants.

– Stop Pennywise the clown by descending into the sewers of Derry Maine and facing the dark incarnate.

– Read more satire from Off The Perch.