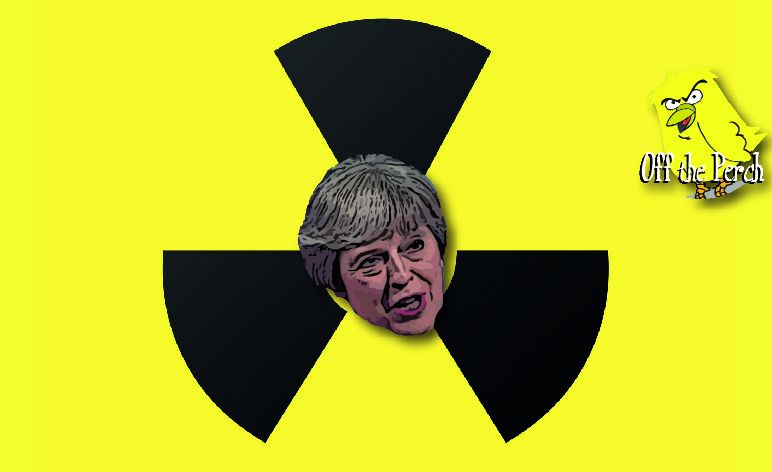 In news that has shocked the world, UK Prime Minister Theresa May has admitted the island nation has been without nuclear weapons for almost 30 years. The nation disarmed at the conclusion of the Cold War in 1991, and has since only maintained a pretence of being a nuclear power.

The crack heard around the world

During an interview with veteran journalist Jon Snow for Channel 4 News, the Prime Minister was repeatedly pressed on Trident. Snow pressured May for an answer on how Labour’s promises on the economy were a ‘magic money tree’, while her blank cheque on Trident was not. He asked:

Prime Minister, the renewal of Trident is set to cost the UK anywhere between £31bn and £100bn. Where is this money going to come from?

To which May replied:

Surely you would agree, Jon, that our nuclear deterrent is critical in protecting lives in our country. It is money that we simply must spend. We are one of the largest economies in the world. And that strong economic performance means we can afford to protect ourselves. By investing in Trident, we also create jobs and investment, which help the wider economy.

And then, Snow triggered the release of the trap:

But Prime Minister, could not the same be said for Labour’s fully costed manifesto? Won’t housebuilding create jobs and investment? Won’t investing in the NHS save many lives? And won’t putting money into the education system to reduce class sizes and better educate our young people pay massive dividends to the economy in the future? So why is it possible for you to magic money up for Trident, and yet not for these equally vital services?

At this point, May was quiet for a long time. And then, she burst into tears, making a shocking admission. There is no Trident.

The Prime Minister told Snow, live on Channel 4 News, that the nuclear deterrent was not actually a weapon, but simply the idea of a weapon:

We disarmed in 1991, at the end of the Cold War. With the Soviet Union dissolved, and no real global nuclear threat – it was agreed that the arms race was over. It wasn’t just Britain, all the nuclear powers disarmed. But we needed to maintain the deterrent, so we all agreed to pretend we still had the weapons. And to agree non-proliferation treaties on any other state getting them. It was a real continuation of Mutually Assured Destruction in a way. If any of us attempted to ‘tell’ on anyone else, we’d be revealing ourselves as nuke-free too.

After a moment’s stunned silence, Snow asked the Prime Minister:

So you are saying that no one in the world has nuclear weapons anymore. Not since 1991? Almost 30 years ago?

May nodded as tears streamed down her cheeks.

“But Mrs May,” continued Snow, “Does your admission not constitute an enormous breach in protocol?”

I really don’t care anymore Jon. I’m sick of the lot of it. Sick of my party; sick of the EU leaders shoving me in a corner like some sort of leper; and sick of that tangerine tycoon in the White House barking orders at me like a literal poodle. I’m done.

At which point the Prime Minister tore her microphone from her lapel and left the studio. She has not been seen in public since.

Despite the fact we know longer have nuclear covfefe…