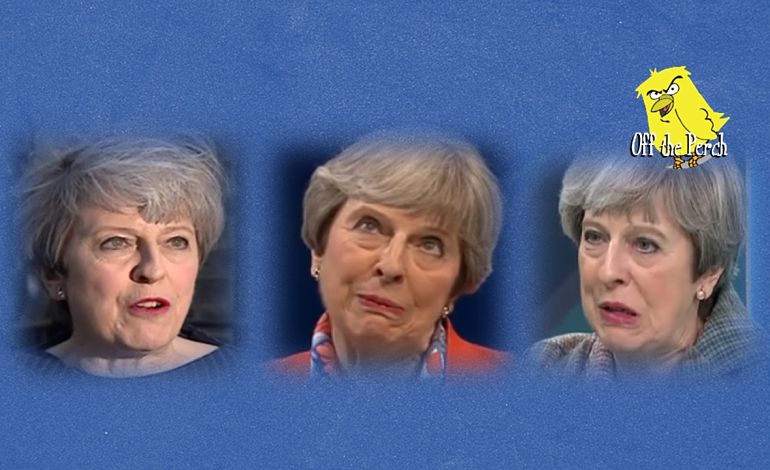 Apparently, Theresa May could go on being absolutely rubbish for years, regardless of the general election result. Basically, after pretending so hard to be awful at politics, she’s actually lost the ability to be anything else.

Look Treacle, fear is the only language the Poms understand. So simply telling them to vote for you just won’t cut it. Far better to make them terrified of what would happen if you didn’t win. But that’s stupid, right? Because you’re miles ahead. Of course you’re gonna win. But you wanna win big. So you’ve got to scare everyone shitless that you’re gonna lose. Trust me on this. I’m a fucking genius, alright? You’ve gotta start your campaign looking like a total beginner. I mean worse than Corbyn, worse than fucking Farron. Maybe even as bad as Nuttall. Like properly useless. And then what you’re gonna do, towards the end, is you start showing everyone how good you actually are. It’ll be amazing.

Method in the madness

Something has clearly gone terribly wrong. Off The Perch spoke to the European Union’s Commissioner for Acting, Lee Strasbourg:

I’ve seen this so many times and it’s such a tragedy. The actor immerses him or herself in the role, applying all the tenets of The Method, and then becomes trapped. The actor diminishes to a husk and the role takes over. In some cases, the actor never truly returns. I’ve seen limps and eye twitches persist for lifetimes. I fear Mrs May may never be freed from that affectation of looking like a startled badger. And it goes deeper than mere appearance. Her ability to do anything even slightly competent could well be fatally compromised. The Method creates but The Method must be respected. It seems Mr Crosby’s inexpert handling of his pupil has caused another casualty.

And yet there may well be a more straightforward explanation. Given that May displayed wretched leadership at the Home Office, it could simply be that she’s always been terrible. First-time voter Jemima Hope told us:

I assumed that May was ‘a safe pair of hands’ because that’s what all the press was saying. But now I can see they were obviously just making that up. Actually, she’s just a fearful, bigoted, arrogant and overly-defensive mess of neurotic control-freakery. I wouldn’t let her sort out my laundry, never mind the country. I suggest she takes a long walking holiday.