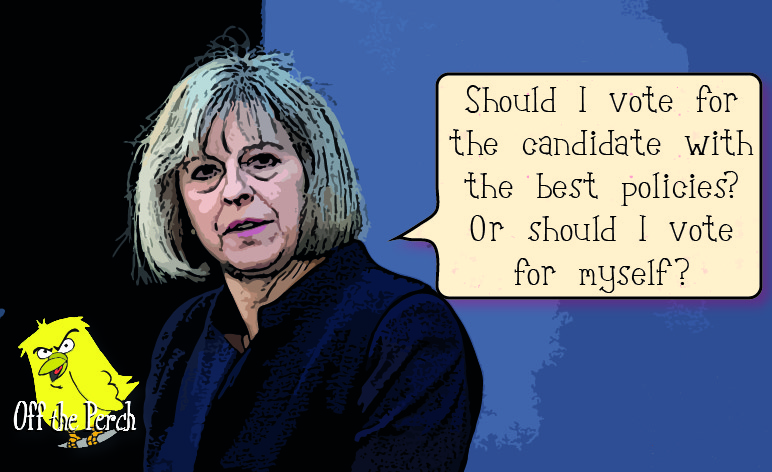 If there’s one thing we now know about Theresa May, it’s that she’s about as likely to give a straight answer as Jeremy Corbyn is to whip out a nuclear launch button and shout:

PHWOAR! LOOK AT THIS BEAUTY! I LOVE A BIT OF THE OLD ULTRA-APOCALYPSE!

Which presented May with a problem on election day, as she was asked a very important question indeed. And that question was: who should lead the country going forwards?

Allegedly, May was in the voting booth for some 45 minutes. Eventually, one of the volunteers asked:

Have you voted yet?

I’m very clear that I’m dedicated to the idea of voting, and that only I can bring the strong and stable slogans that will allow us to Brexit means Brexit.

May spent another 50 minutes in the booth – assumedly still being unable to actually give a straight answer. She then flitted out of the booth and attempted to flee, as if she were illicitly running through a golden field of wheat.

Her advisers managed to wrestle her back into the booth, however, and told her that she wasn’t allowed out until she’d made her mind up.

Eventually, May forced herself into making a choice. As she left the building, a voter outside jokingly asked if she’d voted for herself. May answered:

Let me be very clear, the person I voted for is the person best placed to lead this country.

The voter looked stunned and said:

Oh, so you voted for Jeremy Corbyn then?

May winced and pulled one of those faces she pulls that make her look like an owl on disco-tablets:

And this is why – if you respect Theresa May – you should vote for Corbyn.